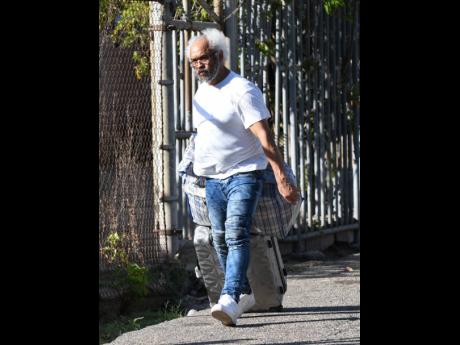 Ricardo Makyn/Chief Photo Editor
Ivanhoe Spencer-Chen pulls along his luggage shortly before leaving Harman Barracks, where he and 16 other deportees were processed last Tuesday.

Sixty-year-old Ivanhoe Spencer-Chen is insisting that his robbery conviction was based on “cooked-up” charges and that his protest of mistreatment in prison caused him to be carted off on a deportation flight to Jamaica.

He was among a group of 17 purportedly “serious criminals” transported from the United Kingdom (UK) last Tuesday on a charter flight.

“I am angry about the whole thing. I can’t even explain. I never robbed anyone,” Spencer-Chen said, while seated on the veranda of a relative’s home in Kingston.

“I feel they deported me because they had beaten me badly. Dem mash me up and I had put in a complaint on them, as I was planning to sue them for it,” said the ex-con, who said he suffers from asthma, deep-vein thrombosis, and diabetes.

Spencer-Chen told The Gleaner that his ordeal began in 2017 when, on his way to a job centre, he was accosted by members of the Tottenham police on an allegation that he had held up and robbed a store. He said he was charged with robbery with a firearm.

“I was stunned. I said to them, ‘Is the wrong person unnu have, man.’ Anyway, I got locked up, as they insisted I was the one who committed the crime. This is the first I’m coming out prison since, now I’m deported,” he said.

Pressing his innocence, the one-time chef said that his family was devastated by his incarceration and now his absence.

“I left my seven children and 10 grandchildren over there. None is happy. It’s pretty sad, because yesterday (Sunday, the 16th) was one of my granddaughter’s birthday. They are accustomed to seeing me on those special days, where I would cook for them, but I can’t now, can I?” he said ruefully.

Recounting court proceedings, Spencer-Chen claims that video evidence presented during his trial failed to prove the prosecutors’ theory that he was party to the crime.

Spencer-Chen said that he was found guilty and sentenced to concurrent prison terms – four years for robbery and five years for the shotgun used in carrying out the crime.

While in prison, Spencer-Chen said he was beaten badly by prison officers.

“I actually was to do two years and six months, which would be up on June 13. But I was yanked out of the UK because I suspect they knew of the plan to sue them,” he said.

Spencer-Chen said that he was served with deportation documents on February 3 and placed on the flight eight days later.

“Next thing I know, I am in Jamaica,” he quipped.

Before migrating to the UK in 1992, Spencer-Chen said that he had been previously employed at The Devonshire restaurant and The Courtleigh Hotel.

He said he is hoping to reacquire his Jamaican documents to make it easier for him to get a job.

The British Home Office had said that the deportees had committed serious crimes such as murder, manslaughter, rape, violence, and dealing in Class-A drugs.