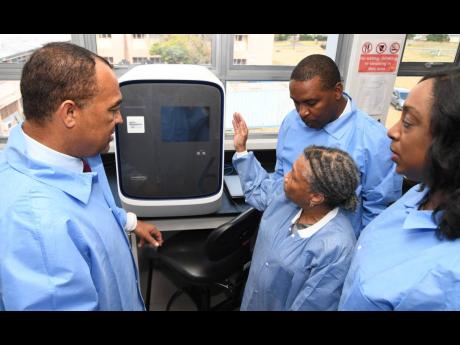 Rudolph Brown/Photographer
Dr Christopher Tufton (left), minister of health and wellness, listens as Dr Monica Smikle (second right), head of the National Influenza Centre, discusses the capacity of a coronavirus testing machine during a tour of the facility at The University Hospital of the West Indies yesterday. Looking on are Dr Michelle Hamilton (right), acting director of the National Laboratory Services, and Dr Carl Bruce, medical chief of staff and consultant neurosurgeon of UHWI.

Despite concerns in the United States about the reliability of the testing regime for COVID-19, better known as the novel coronavirus, Jamaican healthcare officials have defended its accuracy, even if false negatives appear to have been recorded overseas.

The scare emerged over inconclusive results from a limited number of faulty test kits issued by the United States Centers for Disease Control and Prevention.

Nine Jamaicans were trained last week by the Pan American Health Organization (PAHO) to test for COVID-19, and the National Influenza Centre, located at The University Hospital of the West Indies, is the only local testing facility.

“Since last year, the centre has already been re-evaluated by WHO as a collaborating centre and it has passed all the proficiency testing, etc, so we have every confidence that the National Influenza Centre is more than capable,” Theodore-Gandi said.

Head of the unit, Dr Monica Smikle, explained that the polymerase chain reaction method is used to amplify the virus.

“Because this is an RNA [ribonucleic acid] virus, we have to convert RNA to DNA [deoxyribonucleic acid] before testing,” she said during a tour of the molecular laboratory, where the final stage of testing is done.

Acting director of the National Laboratory Services, Dr Michelle Hamilton, is also confident in the testing method being used.

“If you test a person who has symptoms and they come up negative – the virus is not detected, it is highly likely that they have something else. The fact that you may have tested a person two or three times and they are negative, does not mean the test has failed. The test is very accurate, it’s very sensitive,” Hamilton said.

She explained that the method is able to detect as few as 10 copies of the viral gene being tested for, even in the early stages of infection.

Smikle added that it makes it more sensitive than existing assays for HIV.

“Jamaica is at the cutting edge. This is what is being rolled out across the world and within two weeks of the international declaration, here we are,” said Hamilton.

St Joseph’s Hospital in St Andrew has been retrofitted as a quarantine facility.

“We are looking for an alternative location for the Food For The Poor clinic, which, to my mind, is the most inconvenient adjustment for the community,” he said, adding that they are trying to locate it within the community.

Tufton said that the cruise shipping industry posed a “particular challenge” because of the “sheer numbers that each of these vessels carry” – a reference to the 2,000 to 3,000 passengers per ship.

He said that cruise operators were required, under law, to communicate any medical issues to health authorities 24 hours before docking.

“I certainly expect the cruise lines to act responsibly and ... that they would strengthen their monitoring and evaluation ... . We’re not gonna be complacent or overdependent on that, however, and that’s why the dialogue between ourselves is ongoing,” the health minister said.

Up to yesterday, seven persons remained quarantined in Jamaica. None were in isolation.