One man, many victims - Mob beats accused after alleged sexual assault of 6-y-o; his sister and daughter also claim having been molested 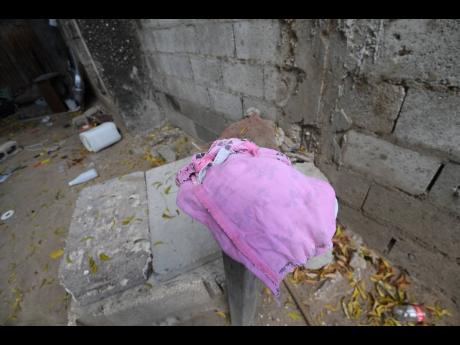 Ricardo Makyn/Chief Photo Editor
This pair of shorts was being worn by the child at the time of the alleged assault. 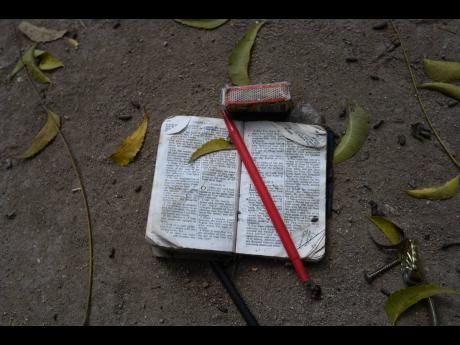 Ricardo Makyn/Chief Photo Editor
A Bible lies open in the yard of a Portmore house where a six-year-old girl was allegedly sexually assaulted. One of the verses reads, “Oh, let the wickedness of the wicked come to an end.” 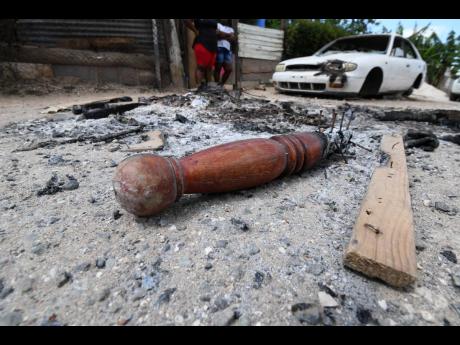 Ricardo Makyn/Chief Photo Editor
Angry residents lit the belongings of the alleged sex-abuse perpetrator in the yard of a Portmore home. 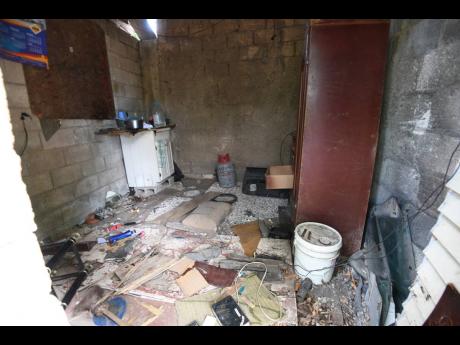 Ricardo Makyn/Chief Photo Editor
The unfinished back room in which a six-year-old Portmore girl was assaulted on Sunday. The man’s possessions were burnt by angry residents on Monday. 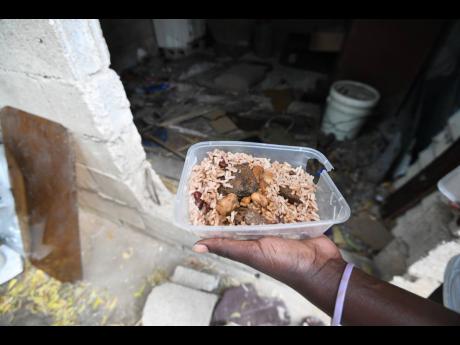 Ricardo Makyn/Chief Photo Editor
A resident holds a container with Sunday dinner that was given to a man who is accused of sexually assaulting a six-year-old girl. He had been offered the meal moments before allegedly abducting the infant and fondling her.
1
2
3
4
5

There is heightened concern for the Jamaican sex offender registry to be publicly accessible after three victims – a daughter, her aunt and, since Sunday, a six-year-old girl – have confessed to being sexually assaulted, years apart, by the same man.

This after the accused man, who is also a taxi operator and father to one of his victims and brother to another, has left a trail of mental scars in at least two Portmore, St Catherine, communities.

The perpetrator, whose name The Gleaner has not published because he has not been charged, is currently under police guard at hospital recovering from a mob attack. He was beaten Sunday afternoon after allegedly abducting a six-year-old neighbour and fondling her in a decrepit back room.

The Gleaner understands that further advances were thwarted after the child’s uncle realised something was amiss and made an alarm.

Yesterday, the child’s 28-year-old father was a portrait of pain, his face awash with tears and regret that he had not been able to prevent the abuse.

His name has not been published to protect the child’s identity.

“My daughter tell me she was in her house sleeping and him come tek her out of her house and bring her over his house. Him all draw her on the ground. Him lock her up and put her on his bed and start rub her down and a tell her you know how long mi love yuh and a try kiss her,” he said.

“She a try fight him off and him draw down her shorts and her panty,” the child’s father said.

The accused man has reportedly known the child since birth.

The child was left under the watchful eyes of an adult as she slept in the room, The Gleaner understands, and that the incident took place when majority of the community folk had gone to the funeral of a respected elder.

“Is like him have the mentality long time and him just get the time fi do it. He went to my babymother bar (not far from the house) to buy half flask of rum and Boom to make sure she was out there and then go back a the house.”

The distraught dad said that he is concerned not only for his child but for others who may have been preyed upon by the accused.

“If me did know say that deh man deh a rapist, him couldn’t even talk to me daughter. … Him play with them and me never yet see him in a da meds deh or me never meds him, so because if nothing fi do mi daughter, him will mek mi know before all mi babymother, so mi frighten fi know say a him … ?”

The girl’s dad, who said he blacked out on learning what transpired, speaks highly of his daughter, who he says is a promising academic and athlete.

At the Portmore home Monday morning, angry residents emptied the accused rapist’s dilapidated one-room structure where the child was assaulted and made a bonfire of his possessions on the road.

Further research led to the location of two other alleged victims, his daughter and his sister.

They confessed to being sexually assaulted during their teenage years.

Our news team understands that he was locked away for close to three years for raping his sister, which occurred at the same location where he fondled the infant on Sunday.

Yesterday, the accused man’s 27-year-old sister recounted the terrifying night when she was assaulted. She was 12 years old.

“I was lying down on my back. I was in sixth grade. I saw a shadow and then feel something heavy on me. He put his hand over my mouth and started to rape me. When my mother came, I told her and she took me to the station. He was charged and we went to court and he did time for it.”

Having not received counselling, she says she is haunted by the memory of the ordeal.

“I thought he was changed because him go jail for it. When him rape me and then his stepdaughter,” the 27-year-old, whose name has also been withheld to protect the child’s identity, told our news team.

The Gleaner also visited another Portmore community where the accused man once lived.

At that location, The Gleaner heard numerous alleged incidents involving the accused man and his victims, including his own daughter.

The accused man’s former lover said she was disturbed after viewing a video of the accused being beaten and thrown into a gutter before he was rescued by the police.

“Him name did call on that some years ago for a 13-year-old. When I met him, he was locked up in Hundred Man for two years, no court on it, for interfering with his sister,” his ex-partner said, referring to the Greater Portmore Police Station.

“Unnu fi just hang the man. I will drive now and go to the hospital and tell dem fi hang him. I used to do all the bookwork for him because him can’t read and write, but if him really do that, him can’t call my name to help him. Him have to go down this time. Him can’t get away,” she said.

Time catch up on him, says woman

The woman confirmed that the man had been accused of sexually assaulting his daughter.

Our news team then journeyed to the home of the accused rapist’s daughter, who lives in another Portmore community.

The 24-year-old daughter, who is now a mother of two, said she was sexually assaulted by her father when she was an infant - “Very small. I can’t remember everything. Probably ‘bout basic school” - and revealed the abuse to her stepmom when she was a teenager.

The daughter said her father offered her money for sex.

“He was giving me money to keep quiet or give him sex in return, but I wasn’t about that and I told the adult.”

Now she is as psychologically torn as other sex-abuse victims, wishing only to scrub his name and face from her memory forver.

“Better him just dead and done and mi just bury him. I don’t know what else to do or say. ... Mi nuh have the strength to even see him face. Me weak. from morning mi head a hurt me.

“If you push mi suh, mi might even drop. Mi think say him did change from dem time deh. Mi think him did learn,” she told The Gleaner.

The mother of the six-year-old, who was taken to hospital for medical checks yesterday, said she was shaken to her core when she heard of the abuse of her daughter.

“Mi run go straight home and I saw him in a car sitting down, bloodied. Mi nuh bother go up the house. Mi just start lick him up and him run out the car,” the child’s mother said.

The trauma of the event was exacerbated by the mother being sent from one police station to another and having to endure a lengthy wait at Spanish Town Hospital on Sunday night. The child’s mother said they returned to the hospital on Monday morning because the six-year-old did not receive medical attention.

The Portmore office of the Centre for the Investigation of Sexual Offences and Child Abuse yesterday confirmed that a sex abuse report had been made.

The Child Protection and Family Services Agency has been notified of the incident and will carry out investigations into the matter.

The registry, which falls under the management of the commissioner of corrections, was established in July 2014 and is currently located at 12-14 Lockett Avenue (Kingston Gardens), Kingston 4.

The registry is headed by a registrar and it is the location from where the Sex Offender Register is maintained and the affairs of the sex offender registry registration centres are administered.

Unlike Jamaica, the Government of Trinidad and Tobago, in a bid to deter, punish, and shame paedophiles and other perpetrators of sexual crimes, has made its sex offender registry public.

The law went into effect on January 31.

It said that under the Sexual Offences (Amendment) Act, 2019, for the first time in the history of Trinidad and Tobago, information on sexual offenders can be shown on an online website for the public to access their names, addresses, photographs and offences committed.