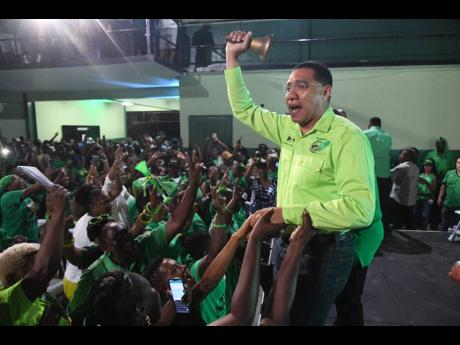 The political machinery of the ruling Jamaica Labour Party (JLP) is expected to go into overdrive today as the party pulls out all the stops to ensure that Pearnel Charles Jr fills the void in Gordon House left by Rudyard Spencer, who resigned after an 18-year victorious run as member of parliament for Clarendon South East.

Despite pronouncements from the People’s National Party (PNP) that it will not be contesting today’s by-election, JLP leader and Prime Minister Andrew Holness warned Labourites recently not to be complacent as he believed that the PNP had a hidden hand in the contest.

Charles Jr is going up against Derrick Lambert, the Clarendon South East independent candidate who ran on the PNP’s ticket in the 2011 general election and lost to Spencer.

Patrick Mitchell, executive member of the JLP delegates from the Longville Park community, told The Gleaner that he had been in touch with canvassers from the various divisions across the constituency and was confident that the mobilisation would be effective.

“We have our eyes and ears to the ground, and we can acknowledge that our canvassers are working as if it’s a full-contest election with all 63 seats,” he said.

Mitchell said that confidence levels of JLP supporters were high, noting that the voters were fired up and ready to give Charles Jr the nod.

“They have also indicated that there are some with challenges getting to polling stations, and we are putting things in place to deal with that. What I can say is that there will be no stones unturned in getting to our people and ensuring that we put up a good showing,” Mitchell maintained.

The PNP’s Basil Goldson, who is assistant constituency organiser with responsibility for enumeration and canvassing, made it clear that the majority of PNP supporters would not be voting in the by-election.

“No, no, no, the majority of the supporters are not voting for Lambert. This is something that I know for sure in my capacity working on the ground,” he said.

The Gleaner saw a copy of a letter that was sent to Lambert from PNP General Secretary Julian Robinson. The missive indicated that the party had become aware that Lambert had been promoting himself as ‘independent PNP candidate’ in the by-election.

“I am directing that you immediately cease and desist from this practice, which is a misrepresentation of the stated position of the People’s Nation al Party in this by-election. I reiterate the party’s position, which is that we are not contesting the by-election as we view it as a waste of taxpayers’ resources and solely as a means to settle an internal dispute within the JLP,” Robinson wrote.

The Gleaner also heard a voice note from the party’s general secretary that was intended for PNP supporters in Clarendon South East.

In the message, he reminded Comrades and party supporters of the decision to and reason for not contesting the by-election.

“We have maintained that, and as such, we have no candidate participating in the election. I don’t want you to be confused by anybody else purporting to be a candidate of the PNP. We have none in this election. This is Julian Robinson, your general secretary. I urge you to prepare for the general election, where we will be victorious with our candidate, Patricia Duncan Sutherland,” he said.