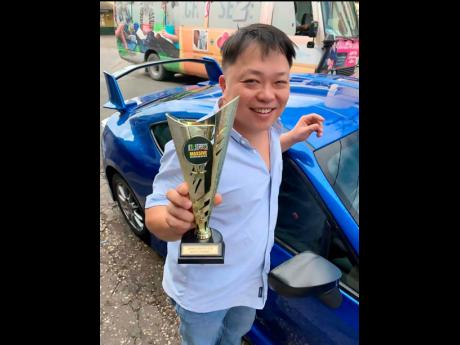 The St James police yesterday took two men into custody following a brazen mid-morning incident in which a popular Chinese businessman and his personal security guard were shot and killed outside a bank across from the Church Street Police Station in downtown Montego Bay.

The dead men have been identified as Kenneth ‘Kenny’ Li, the operator of the Barnett Street-based Cash Smart Supermarket, and Carl Reid. A Chinese national who was also in the vehicle with the deceased reportedly sustained injuries but survived the attack.

“Mi shock when mi si the boy dem a point the gun dem inna the bus … same time everybody start run fi cover,” a taxi operator told The Gleaner. “It kinda shocking fi see di entire ting happen right in front a di police station and not even one police come out come fire a shot after the man dem.”

According to police reports, about 11 a.m., Li, Reid and the other man were on their way to the bank, which is located at the corner of King and Church streets, to deposit money. As they stopped in the vicinity of the bank, two men dressed in hoodies, with handkerchiefs around their faces, walked up to the minivan, pointed handguns at the men, and demanded money.

Crashed into another vehicle

Li, who was driving the vehicle, reportedly attempted to drive away but the men opened fire on them. They crashed into another vehicle, leaving them at the mercy of gunmen, who kept firing at them.

According to an onlooker, one of the gunmen reached into the crashed vehicled and removed a knapsack believed to be laden with cash.

The men then escaped in a waiting car, leaving the bloodied Li and Reid dying in the blood-soaked vehicle.

The shooting occurred at a time when downtown Montego Bay had been enjoying a welcome break from violent crime.

While most serious and violent crimes are on the decline, murders climbed by 11.5 per cent up to the end of February. Two hundred and thirty-three people were slain up to last Saturday.

Just under half the rural police divisions have tallied increases in murders since 2020, and all but one of the eight metro zones have shot up, with St Andrew North rising by almost 290 per cent. Nearly half of the 19 police divisions islandwide are under states of emergency.