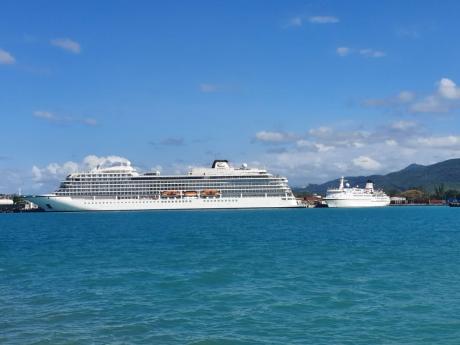 Photo by Janet Silvera
A ship and yacht are seen off the coast of Montego Bay yesterday. Jamaicans have expressed mixed feelings over the Jamaican Government’s coronavirus protocols.

Jamaica’s hard line on its novel coronavirus travel protocol has been criticised by a leading adventure tourism stakeholder as ill-conceived and overblown.

Despite late-night talks on Monday, Carnival Cruise Line said its ships would bypass Jamaica because negotiations had broken down in softening docking protocols.

“I’m not a health professional, but if people get on Carnival ships, they are properly screened, which they surely would want to do because Carnival has to protect themselves, all cruise ships do, in this hysteria which is sweeping the world,” Drakulich said.

Taking a swipe at the Government’s decision to prevent a limited number of passengers from disembarking from cruise ships last week and this week, Drakulich argued that the policy of the Jamaican health authorities was unnecessarily bureaucratic.

Travellers from Italy, China, South Korea, Singapore and Iran are not permitted to land in Jamaica.

“If cruise ships put in measures, then certainly when they come to shore here, it makes no sense for a ship to be docked and part of the crew to be taken off because the other passengers are Italians, for example,” Drakulich argued.

“It’s in the cruise ship’s best interest to make sure that when people get on board their boats, before they sail from their port, they are cleared to sail, and if that’s the case, then they should be clear to land anywhere that they land in the Caribbean.”

The Mystic Mountain operator believes that the real victims of the COVID-19 fallout “are the people of Jamaica, the taxi drivers, the vendors”.

Carnival Cruise Limited made good on its threat to pull out of Ocho Rios, with the Carnival Horizon, with a passenger capacity of 5,070 and 1,450 crew, failing to arrive as scheduled on Tuesday. Ironically, the Caribbean Princess, which, like the Carnival Horizon, is owned by Carnival Cruise, did arrive in port and persons allowed to ­disembark. The Caribbean Princess has a capacity of 3,592 passengers and 1,200 crew members.

At least one inbond merchant says he has already sought an overdraft facility from his bank owing to the fallout with Carnival Cruise Lines, which has diverted all its ships to competing ports for the month of March.

The move will see Montego Bay’s Cruise Port losing three Carnival calls – two by Carnival Glory and another from Carnival Freedom – carrying 9,000 passengers and 3,000 crew diverted to ports such as Mexico, Dominican Republic, Belize, and the Turks and Caicos.

“It is 50 per cent of my business. Emergency overdraft situation. I have to think this will last over a month. My reserves are kept for hurricanes, not what is happening now,” said the merchant, whose family has been in the business for more than 50 years.

The merchant, who requested anonymity to preserve the privacy of his business arrangements, said he also has tenants who have expressed fear they will not be able to pay their rent after March, owing to the uncertainty regarding the novel coronavirus global outbreak and the cancellation of cruise calls.

“Carnival sends twice the number of ships in the summer, so if they decide to go elsewhere, this will be a massive loss for merchants.”

However, two ships, TUI and Vikings, docked in the tourism capital’s port on Tuesday, bringing in some 2,730 ­passengers, plus crew.