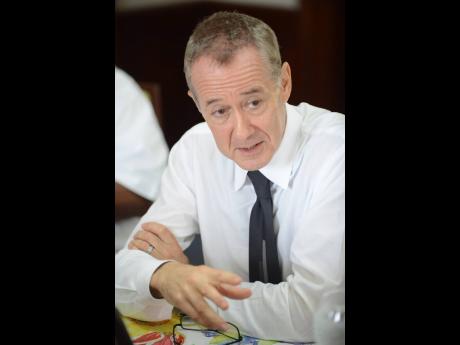 Jamaica must begin to seriously tackle corruption and go after corrupt public figures or face dire consequences, a renowned academic has warned.

Professor Anthony Clayton, head of the Institute for Sustainable Development at The University of the West Indies (UWI), Mona campus, said corruption “usually gets much worse in a society already damaged by corruption”.

“If we don’t find the courage to deal with this problem and call out the corrupt figures in public life who have crippled Jamaica’s development, Jamaica will continue with the same pattern of dismal underperformance,” Clayton declared.

Jamaica’s National Security Policy, crafted in 2014 by a team of consultants led by Clayton, estimated that Jamaica loses five per cent of gross domestic product (GDP) or nearly $100 billion annually due to corruption and related crimes.

Clayton offered a raft of proposals he believes could help reduce corruption and make billions of dollars available to other critical sectors, including the police force and schools.

The Police Federation, which represents cops up to the rank of inspector, cited a number of areas within Jamaica’s security apparatus, including the Jamaica Constabulary Force (JCF), where increase expenditure would boost morale and have a positive spin-off on the fight against criminals.

Over the last two financial years, the Government spent a total of $30.8 billion for the compensation of employees across the police service, but for Sergeant Patrae Rowe, chairman of the Police Federation, that figure does not tell the true story.

A police sergeant on the front line of Jamaica’s pushback against marauding criminals take home a maximum monthly salary of just over $210,000, Rowe told The Sunday Gleaner.

“That’s for a sergeant at the highest level of the scale, so you can imagine the salary for a constable,” he said.

The situation is further compounded by complaints that rank-and-file cops are routinely required to work between 60 and 80 hours per week, but are only paid for a 50-hour workweek.

According to Rowe, payment for a 40-hour work week and 10 additional hours was first implemented in 2008 and was intended to be a short-term arrangement to give the Government time to revamp the overtime system for cops.

Twelve years later, he said cops are working far more hours than they are paid for, “therefore, it does not inspire any confidence in the system, it does not allow for proper motivation of staff and it really offends the principle of decent work for decent pay”.

The police union boss noted that nearly 250 cops have died in the last five years, three-quarters of them from lifestyle illnesses, and said increased allocation to the police service would allow the Government to pay the full cost of healthcare services for cops and to establish a specialised hospital for policemen and women as provided for in the JCF Act.

At present, cops have to pay 20 per cent of their medical expenses, Rowe said.

Owen Speid, president of the Jamaica Teachers’ Association (JTA), used something he saw during a visit to a high school in Trelawny last week to underscore the chronic under-resourcing of the education sector.

“When I went to one of the areas used by staff there, a resource room, what I saw was one working light bulb in good-sized classroom. The teacher, if he is to read something to the class, has to move from one location to go to where the light bulb is in order to see,” Speid recounted incredulously.

He said this is an example of the inadequate subvention to public schools.

“This is a high school and the subvention for the high schools is not enough, and it’s worse at the primary level. So, you can just imagine what I’m talking about. This directly affects the way how teachers operate,” noted the JTA head.

Professor Clayton insisted that corruption can be successfully tackled in Jamaica, holding up Georgia, which experienced high levels of corruption after the collapse of the Soviet Union.

He noted that in 2003, a new administration took office there and quickly launched an aggressive campaign to stamp out corruption, which included mass dismissals and the closure of entire government agencies considered irredeemably corrupt.

The result, he said, was that in five years, Georgia’s tax revenues increased from 12 per cent to 25 per cent of GDP. “The people saw services improving; power supplies were more reliable; crime rates fell and the government paid off its debts,” Clayton noted.

For Jamaica to reap similar results, the university professor said priority attention must be focused on greater transparency in the award of government contracts; the strengthening of the Proceeds of Crime Act (POCA); and a commitment to ending the culture of impunity that permeates the society.

“The law must be impartial, affordable and accessible and applied equally to everyone. Anyone who breaks the law, regardless of whether they be a minister of government, member of parliament, attorney or wealthy businessman, should face the same penalties as everyone else,” he insisted.

Clayton suggested that POCA be amended to introduce unexplained wealth orders and reverse the burden of proof in suspected cases of embezzlement, racketeering and money laundering.

“High levels of crime and conflict create chaos, which in turn provides cover for the corrupt and creates even more opportunities for profiting from crimes such as embezzlement, fraud and money laundering,” he reasoned.