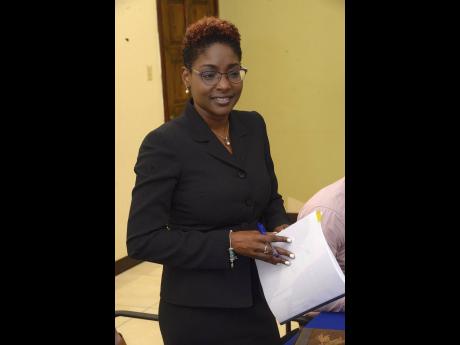 Auditor General Pamela Monroe Ellis says she examined the Fiscal Policy Paper (FPP) in accordance with the Financial Administration and Audit (FAA) Act and submitted the document to Parliament within the time stipulated by law.

Before the start of the Budget Debate in Parliament on Tuesday, lawmakers questioned why they were seeing the auditor general’s response to the FPP days after the Standing Finance Committee closed its two-day examination of the Estimates of Expenditure on March 4.

Section 48B(6) of the FAA Act requires the auditor general to examine the components of the FPP within two weeks after the document is laid before the Houses of Parliament and to provide a report to the bicameral legislature.

The Gleaner asked for evidence to substantiate the claim that the auditor general had submitted copies of the FPP to Parliament in accordance with the law. Monroe Ellis provided a one-page document addressed to the clerk to the Houses of Parliament, indicating that 25 hard copies had been signed and received by the staff of Parliament on February 25, 2020, six clear days before the meeting of the Standing Finance Committee.

With Finance and the Public Service Minister Dr Nigel Clarke tabling the FPP on February 11, 2020, in Parliament, the February 25 submission by the Auditor General’s Department would have satisfied the two-week requirement of the FAA.

On Tuesday, Leader of Government Business in the House of Representatives, Karl Samuda, responded to Opposition Leader Dr Peter Phillips, who said it appeared that the requirement for the tabling of the auditor general’s report to allow the Standing Finance Committee of Parliament to review it had not been met.

“The purpose of the fiscal rules put in place is to enable an independent body to make an assessment of the Fiscal Policy Paper and to give the Standing Finance Committee the benefit of that assessment so that the Budget can be properly considered. In the absence of that, what we are elevating is form instead of substance,” he said on Tuesday.

“The fact that it is here today, which is after the fact, is unfortunate,” said Samuda.

The leader of government business said that he sought information from the clerk to the Houses “if the documents were presented prior to the sitting of the Standing Finance Committee, in which case, the blame would lie with the Auditor General’s Department.

“If, on the other hand, they had come here and languished in this office prior to the sitting of the Standing Finance Committee, then that is an entirely different matter. That would have to be taken up at a different place.”