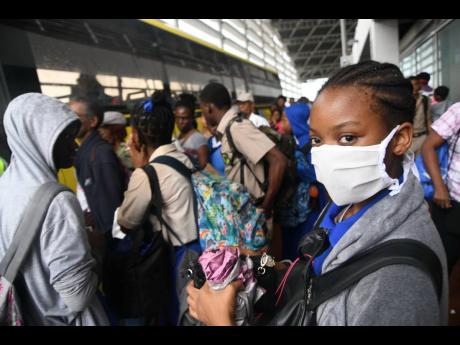 Rudolph Brown/Photographer
Students wear protective gear against the spread of the novel coronavirus at the Half-Way Tree Transportation Centre on Wednesday. Two cases of COVID-19 have been confirmed in Jamaica.

Despite the growing concerns over the outbreak of the deadly novel coronavirus in the United States and the United Kingdom, the Holness administration has acknowledged that the potential fallout from Jamaica’s major trading partners has swayed the decision to delay a ban.

That both countries have heavy concentrations of Jamaican migrants has also proven to be of consequence, Health and Wellness Minister Dr Christopher Tufton revealed.

Tufton was responding to a question posed by The Gleaner about why the Government had delayed the imposition of travel restrictions on two of its main bilateral partners, which have reported an aggregate of more than 1,700 COVID-19 cases.

“There are other important variables that link both countries, so the United States, for example, the reality is that we depend on different types of relationships with that jurisdiction, trade relations, for example. A lot of imports, whether it’s materials, medicine, food, or otherwise. Those have to be placed in the consideration as part of the risk assessment, and then, ultimately, a decision is made,” Tufton said.

He was speaking yesterday evening at an emergency press conference at Jamaica House in St Andrew, where the second imported case of COVID-19 linked to the United Kingdom was officially confirmed.

On Tuesday, the first imported case of COVID-19, also linked to the United Kingdom, was confirmed.

Tufton said that although the two confirmed cases thus far are linked to the United Kingdom, this was not enough cause to impose a travel ban given the rate of spread in that country.

“The decision around travel restrictions on different countries is based on a number of factors. First of all, the virus is present in over 120 countries, so that reason is not as significant anymore otherwise 120 countries would be banned or restricted. More importantly, it is about the extent to which the virus is present within that jurisdiction, and that is juxtaposed against the size of the jurisdiction , the country. Very importantly, it is a function of the rate of spread,” he said.

Prime Minister Andrew Holness indicated that the decision not to impose a ban had been thoroughly considered.

Since the emergence of COVID-19 in Wuhan, China, last December, more than 125,000 people have been infected and approximately 4,600 have died.