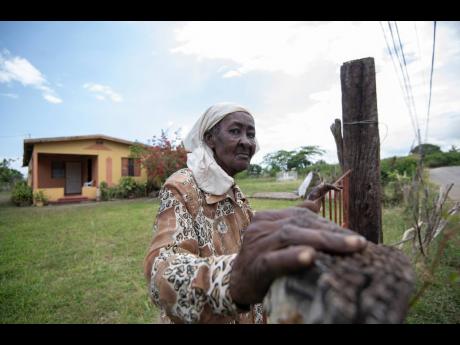 Gladstone Taylor/Multimedia Photo Editor
Linda Allen, a resident of Corn Piece Settlement in Clarendon, was unaware of the first person to have died of COVID-19 complications lived near her home. Allen, who is 80 and lives alone, is among the most vulnerable age cohort for the pandemic’s worst affected. The community was placed under quarantine on Thursday night.

An elderly man from Corn Piece Settlement in Clarendon could be one of many contacts the Ministry of Health will be following in relation to the traveller from New York who was confirmed as Jamaica’s first fatality of COVID-19.

The community was yesterday placed under quarantine as public-health officials concluded that many residents would have been exposed to the deceased, who was symptomatic, and, therefore, would have a high risk of infection.

The 67-year-old resident, who said he had come in contact with the now-deceased 79-year-old man, is fearful for his life not only because of his advanced age, but because he has underlying health conditions.

“I am really worried about it because of my age and because I have a heart condition. I even did affi do surgery already,” he told The Gleaner yesterday. “Me go over the yard because me never see him for this long time, so me go over deh the Saturday.”

“Me nuh think me did make no physical contact with him, but yuh can’t too know ... . My daughter go over there, to, and hold on pon the gate, and all them thing deh, too, so you may never know,” the elderly resident said.

The sister-in-law of the deceased man said that he, too, had long suffered from a slew of complications, including a history of heart problems, conditions that made him as vulnerable as the majority of severely affected people worldwide who are elderly and ill.

Chief Medical Officer Jacquiline Bisasor-McKenzie revealed on Wednesday that the COVID-19 casualty, who arrived on a JetBlue flight from New York on March 12, was ailing from diabetes and hypertension and presented to the Lionel Town Hospital on Monday, March 16, with fever, cough, and shortness of breath. He also suffered from weakness in the joints.

Neither the COVID-19 deceased nor the 67-year-old man has been named by The Gleaner because of the risk of stigma, particularly to their relatives.

There are approximately 245,000 cases of COVID-19 worldwide, with just over 10,000 deaths. It is estimated by China’s National Health Commission that 80 per cent of those who died were over the age of 60, and 75 per cent of them had pre-existing health conditions such as cardiovascular disease and diabetes.

Based on those statistics, persons who suffer from cardiovascular disease have a 13.2 per cent risk of dying from coronavirus complications and those suffering from diabetes, 9.2 per cent.

A 20-year-old neighbour of the deceased, who said she had close relations with the family, disclosed to The Gleaner that she was extremely worried about her elderly father, who is also blind.

“I always go over there, and I am always around them. I was over by the house on Sunday, then briefly Monday evening, then briefly Tuesday morning,” the neighbour said.

“I haven’t spoken to any of them since in person, but when I spoke to his granddaughter on the phone, she said she is frustrated about the situation, and you have to understand that they are dealing with this and grieving at the same time,” said the neighbour, who requested anonymity.

According to her, even though she has not been feeling any symptoms, she is planning to go and get tested for the virus.

In Italy, which now has more COVID-19 deaths than China – where SARS-CoV-2 first emerged – there have been more than 41,000 cases and 3,405 fatalities. Europe has been declared the epicentre of the outbreak.