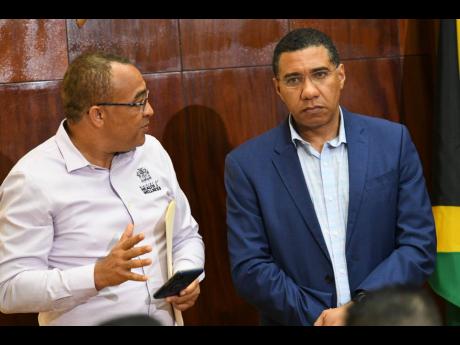 Rudolph Brown
Prime Minister Andrew Holness (right) in dialogue with Dr Christopher Tufton, minister of health and wellness, at a press conference yesterday to announce new measures to contain the spread of COVID-19. The press conference was held at the Banquet Hall, Office of the Prime Minister, 1 Devon Road, Kingston.

All Jamaican airports and seaports will be closed to incoming passenger traffic effective today, at 11:59 p.m., as the Government increases its efforts to curb the spread of COVID-19.

Incoming and outgoing cargo as well as outgoing passengers will be allowed.

Prime Minister Andrew Holness, who made the announcement in a press conference last evening, said the new measures would run for an initial 14 days.

Three more patients have been confirmed with the virus bringing the total to 19.

Minister of Health and Wellness, Dr Christopher Tufton said based on assessments, it was fundamental for movement to be paused.

“All the countries of the world are imposing restrictions and our attempt at trying to manage the potential crisis that we face has to include reduction in the movement of persons,” Tufton said.

The newly confirmed patients are a 38-year-old male, who is a US citizen with a travel history from Boston, and a 30-year-old female, who travelled from New York. They arrived in Jamaica on March 14 and March 17, respectively.

The third patient is a 60-year-old female who is a retired resident of Portland – she is still under investigation.

Tufton made an appeal for passengers on three recently landed JetBlue flights to make contact with the health ministry.

“These flights are flights that had persons who eventually tested positive,” Tufton said.

The prime minister noted that a quarantine centre would be established at The University of the West Indies, Mona, and final-year medical students would be utilised to support the clinical and surveillance activities of the health ministry.

Meanwhile, Minister of Justice Delroy Chuck said consistent with the measures the Government has taken, court operations would be scaled down for the period March 23 to April 20.

“This means that all trials in that period will be postponed and new dates will be put on the website or can be obtained by calling certain numbers ... . Persons who are on bail, the bail will be stayed until the next court day,” Chuck explained.

The courts will remain open to deal with maintenance payments, matters affecting children and matters arising out of the Quarantine Act, among other things.

Persons who were passengers on the following flights are being asked to make contact with the health ministry:

Arrived at the Norman Manley International Airport on Tuesday, March 17, at 1:00 a.m.

Arrived at the Norman Manley International Airport on Thursday, March 12, at midnight.

Arrived at the Sangster International Airport on Saturday, March 14, at 2:14 p.m.

- A total of 19 cases confirmed

- Eighty-nine cases have been tested at the National Influenza Centre

- Forty-six people are in isolation in government facilities