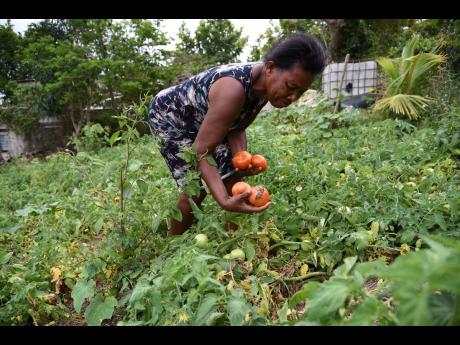 Ian Allen/Photographer
Elaline Simpson, a farmer in Melsam, St Elizabeth, picks tomatoes amid a downturn in the market because of the shutdown of the hotel sector as a result of the COVID-19 pandemic. The Government yesterday announced a $240-million programme to ease a glut of produce on the market.

The Ministry of Industry, Commerce, Agriculture and Fisheries (MICAF) will be seeking to remedy the glut of farm produce on the local market with an injection of $240 million.

COVID-19 has dealt a crippling blow to the hotel industry and has resulted in a downturn in demand from the agricultural sector, one of its major suppliers.

In a virtual press briefing yesterday, Minister without Portfolio J.C. Hutchinson said farmers with excess produce are being identified by the Rural Agricultural Development Authority (RADA).

Produce will be purchased from farmers with immediate effect.

A gamut of other measures are being undertaken to curtail potential losses.

“We have met with agro-processors who, where possible, have increased their intake of items like pepper and scallion to be processed into mash. Juice makers have also committed to, where possible, utilising more local products in their juices, as well as to process for storage,” Hutchinson explained.

The ministry has received commitments from major supermarkets to purchase additional volumes of produce and has been intensifying assistance to farmers to get their supplies to the main markets.

Hutchinson posited that it was an “opportune time to put a structure in place for the agricultural sector” and proposed the establishment of food marts in every district.

This, he said, would provide purchasing opportunities for those who are reluctant to take public transportation during the crisis and minimise the threat of waste.

With global trade on the decline as COVID-19 surges, food security remains high on the public agenda. Hutchinson gave an overview of the various agricultural sectors and sought to assure the nation that “there is adequate food in the country”.

“RADA has conducted an assessment of the country’s supply of selected critical agricultural produce and is reporting that, by all indications, vegetables, condiments, fruits, roots and tubers will be in normal supply for this time of the year,” he said.

The fisheries industry will have an immediate fallout of approximately $2.1 billion, primarily because of the downturn in export for lobster.

Hutchinson said the ministry is mindful that a significant proportion of raw material for animal feed, fertilisers and pesticides are imported.

“Our input suppliers have assured us that they have at least three months of supplies available and firm commitments for replenishment,” said the minister without portfolio.

n Fruits will be in their usual abundance.

n Adequate supplies of pork in marketplace and sufficient animals in system for slaughter.

n Chicken meat represents approximately 80 per cent of meat protein supply and production will average approximately 2.7 million kg per week for the next nine weeks.