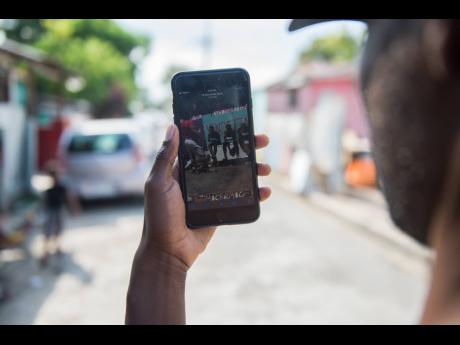 Gladstone Taylor/Multimedia Photo Editor
A man watches a video showing Dayne Mitchell with friends and neighbours enjoying themselves on December 12, 2019. Friends of Mitchell said that his general dialogue, which might appear offensive, is an example of his mischievous personality.

Apprehensive that the full brunt of the law might come down hard, residents of Penso Street in Jones Town are pleading for the police to exercise leniency towards Dayne Mitchell, a garrulous man whose April Fools' Day "joke" got him curfewed in jail.

Mitchell, 37, was one of 10 persons charged islandwide for breaches of the Disaster Risk Management (Enforcement Measures) (No. 2) (Amendment) (No. 2) Order, 2020 following Night One of the nightly curfew, which ends on April 8.

Residents yesterday cited intoxication and habitual gimmickry as the triggers behind the viral video done by Mitchell, who spewed invectives at the prime minister and the police and incited non-compliance with the order imposed to rein in COVID-19 infections.

A senior citizen told The Gleaner that she was surprised at Mitchell’s utterances, claiming that he was usually respectful.

“You know some young people weh talk when dem see them friend, dem exalt and talk somethings weh dem don’t even mean … ,” said the woman, who declined to offer her name.

“Nobody nah complain ‘bout him doing anything bad in the area.”

The foul-mouthed tirade against Holness was trending in Jamaica yesterday as the viral video made the rounds on social media.

In the 21-second-long amateur video, apparently captured on smartphone, Mitchell said: “Real unruly pickney we out ya … big pu$$% police . … Andrew Holness guh [expletive deleted] … . Yuh can’t do we nothing. We out ya and we nah go in … .”

He also directed other slurs at the prime minister.

Mitchell’s friend, Ricardo Pinto, said that they have been urging the accused to desist from using homosexual slurs.

“Di yute weh do it is a gimmicks man. Him like fi gimmicks people and just have fun. Nothing personal towards the police or the prime minister,” Pinto said.

Residents showed our news team other videos dated months ago with Mitchell using the same slur to friends while hanging out on Penso Street.

A shopkeeper who sold Mitchell drinks before the video also appealed for mercy, saying he might have been tipsy.

“Him sorry right now. Inna himself when him get sober him probably a say weh mi do … . It shocking ‘cause we never think it a go escalate,” the shopkeeper said.

Residents told our news team that despite the video, Mitchell – a so-called “granny boy” – and other residents did not disobey the orders of the curfew. The video was alleged to have been recorded before the 8 p.m. cut-off.

The police, led by Senior Superintendent Steve McGregor, got wind of the video and went in search of Mitchell, who was reportedly found at home under a bed.

Mitchell’s girlfriend, whose identity is being withheld, said it was a joke gone too far.

“Him put it on his WhatsApp. Whosoever tek it off, dem shouldn’t do that. Him nuh mean nothing by it. A some joke fi people laugh, not for it to go global. A jus people run with it,” she said.

The residents also told The Gleaner that they stood by the orders of the curfew and insisted that the video had been created before 8 p.m. on Wednesday.

One member of the Jones Town community expressed concern about Mitchell’s crying grandmother, who is reportedly sickly and worried about him.