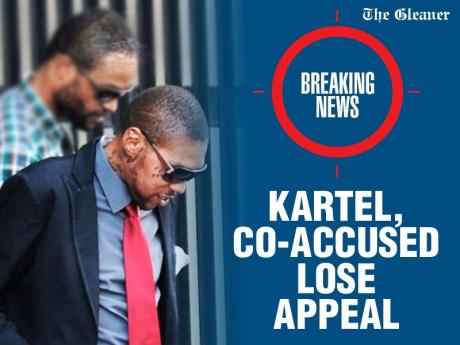 After a near two-year wait, the Court of Appeal this morning handed down a judgment affirming the murder conviction of the popular entertainer.

Six years to the day popular dancehall artiste Vybz Kartel was sentenced, he has lost his appeal against his murder conviction.

After a near two-year wait, the Court of Appeal this morning handed down a judgment affirming the murder conviction of the popular entertainer.

The court also upheld the convictions and sentences for dancehall artiste Shawn Storm and two other men, Kahira Jones and Andre St John.

With the ban on public gatherings of more than ten persons as part of the measures to contain the spread of the coronavirus, the decision by the Appeal Court was handed down via a conference call between the panel of three judges, prosecutors and the attorneys for the four men.

President of the Court of Appeal Dennis Morrison, Frank Williams and Patrick Brooks heard the appeal.

In April 2014, Kartel, whose real name is Adidja Palmer, Shawn Storm, given name Shawn Campbell, Jones and St John were convicted for the August 2011 killing of Clive ‘Lizard’ Williams at a house in Havendale, St Andrew.

WATCH: When Kartel was found guilty

They were all sentenced to life in prison by since retired High Court judge Justice Lennox Campbell.

He ordered that Kartel serves 35 years in prison before he becomes eligible for parole.

Shawn Storm, Jones and St John were ordered to serve 25 years each before being eligible for parole.

The Vybz Kartel trial was one of the longest criminal trials in Jamaica’s history.

Prosecutors led evidence including voice notes and text messages as well as videos taken from several phones, that Williams was lured to the Havendale house and beaten to death over two missing firearms.

According to prosecutors, Williams and another man, who was the star witness, were summoned to the house to account for the guns.

The main witness testified that he ran from the house while he and Williams were being questioned about the guns.

He gave evidence that when he left, he saw Williams “lying on the ground not moving”.

Kartel and his co-accused denied any involvement in the killing.

But the near six-month trial ended with a 10-1 decision to convict the four men and allegations that one member of the jury tried to bribe his counterparts to return a not-guilty verdict.

Four days after the trial ended, lawyers for the four men went to the Court of Appeal to challenge the convictions, pointing to several missteps by Justice Campbell.

They argued, among other things, that Campbell erred when he allowed the trial to continue after he became aware of the bribery allegations and that when the eleven-member jury was sent to consider their decision at 3:45 p.m, it placed them under pressure to arrive at a “rushed verdict.”