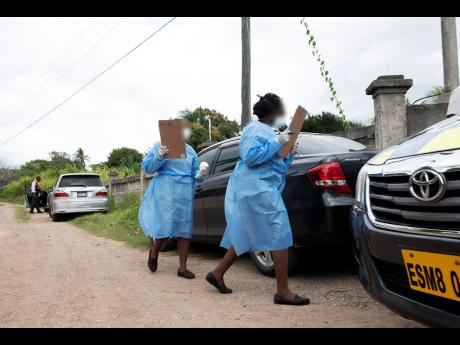 File
Healthcare workers canvassing householders in Corn Piece Settlement, one of the flashpoints of COVID-19 spread in Jamaica. Several cases throughout Clarendon have been linked to the 79-year-old Corn Piece man who died in mid-March.

The Ministry of Health and Wellness is looking for volunteers to carry out testing for COVID-19 as a senior health official told a parliamentary committee yesterday that healthcare workers have expressed fear in conducting the procedure.

“If we get volunteers to actually do the testing ... then we (could) enhance the testing at the health facilities,” Dr Karen Webster-Kerr, national epidemiologist, told members of the Special Select Committee discussing issues related to COVID-19 and its impact on the country.

The widely used method to test for COVID-19 is the swabbing of the nose or back of a person’s throat.

She told the committee that the ministry was seeking to address the issue by conducting continued training of health staff.

Webster-Kerr said that at present, the country had the capacity to conduct 1,260 tests weekly. She revealed yesterday that 153 tests had been conducted this week but noted that the ministry would like to reach a target of at least 250. “We are getting them but not as much as we hope,” she noted.

She reported that in another two to three weeks, the National Public Health Laboratory would be able to carry out more tests.

The ministry will also embark on its mobile testing in the South East and North East regional health authorities.

“The capacity is there, but we are not getting the amount of samples because if all the samples come (targeted samples), we can manage.

The senior health official pointed out that testing for COVID-19 was a similar exercise to testing for influenza, and health personnel were familiar with the procedure. “We understand the fear, but we have to overcome it,” she said.

Chairman of the Special Select COVID Committee, Dr Christopher Tufton, said that the fear displayed by health workers was understandable. “There is enough information that we know very little about what we are dealing with to justify the concerns around the fears that exist, and healthcare workers are humans,” he said, noting that they, too, were on a steep learning curve.

“The logistics, I am told, of taking a sample is that when you insert that device in your nostril (or) to the back of your throat, one of the sort of involuntary responses is a cough or sneeze.”

He said that despite wearing protective gear, the prospect of someone coughing or sneezing while the sample was being taken could potentially the spread the virus.

“It is a frightening experience,” Tufton said.

The minister urged Jamaicans to support healthcare workers amid the outbreak here.

Positive tests for COVID-19 have now increased to 47, with an additional three persons becoming infected.

Testing positive for the disease are a couple from St Elizabeth with a travel history from New York. The woman is 79 and the man 73.

The other person is a 32-year-old male from Portland, with no travel history. His mode of transmission is under investigation.

There are now 27 imported cases, 17 import related, and three are under investigation.

Jamaica has tested 476 samples, including those tested for severe acute respiratory infections. Of the aggregate number, three results are still pending.