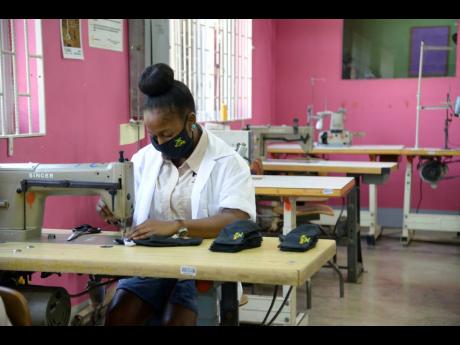 What started as a goodwill gesture has grown into a national effort centred on loyalty and patriotism to curb the spread of the novel coronavirus.

When the global pandemic started to impact Jamaica, Colonel Martin Rickman thought it would make sense to produce reusable fabric masks to protect vulnerable members of the population.

“The intent was to mass-produce them and take them out on the streets and literally distribute them to people taking taxis, to special areas like infirmaries, and to social workers,” the national coordinator of the Housing, Opportunity, Production and Employment (HOPE) Programme said.

When his investigations revealed that protective masks were being sold at exorbitant prices, Rickman recalled some of his trainees to the HEART Trust/NTA Garmex facility on Marcus Garvey Drive and directed that the masks be done to exacting specifications.

They would be made in the national colours – black, green, and gold; comprise two layers of dacron/cotton composite overlaid by cotton; with the Jamaican flag emblazoned on them. Once word got out, the response to the initial offering was overwhelming, with support from corporate Jamaica pushing orders to 5,000.

“Island Grill, for instance, wants all of their staff to be wearing these masks, and they have offered to pay for these masks with the understanding that I would be able to give away some of them free,” Rickman said.

Among organisations that have made orders are GraceKennedy Group, the Shipping Association of Jamaica, and National Baking Company.

Corporate Jamaica has just been fantastic, he added, citing the case of L.P. Azar.

Said Rickman: “I got a number for Andrew Azar, and I called him and explained what I intended to do, and he said, ‘Colonel, come down to the factory and I will give you anything you need,’ and he has given me all the material to make the first set, and I really am appreciative of all the goodwill coming out of these entities.”

The Ministry of Health and Wellness has given the initiative the thumbs up, and the Bureau of Standards Jamaica is also on board, The Gleaner has learnt.

“These masks being made by the HOPE interns are for everybody, and the more people wearing masks out there is the better to drive down spread of the disease, and the thing is that we are engaging these young people who otherwise would have no form of income,” he told The Gleaner.

The mask initiative, said Rickman, has offered young people a stipend and is a signal that “we are also keeping the economy going”.

For 21-year-old Sashana Johnson, the call-up to HOPE has provided exposure and set her on a new career path.

With a face mask in place, she paused from sewing to recount her journey, adding that she initially hesitated about the programme. However, after three months at home in Duhaney Park, St Andrew, having been laid off from her call-centre job, she finally signed up at the urging of her mother and aunt.

Having studied food and nutrition at Jonathan Grant High, she had been seeking a job in that field but is now looking to a new vocation.

“I wanted to be a teacher, so I am thinking, ‘Why not go to college and do more studies on fashion and design?’ Then I can come back and teach clothing and textile or fashion design,” she said, adding that the programme offered new horizons on team building.

As global debate rages on the utility of masks in preventing contraction of the virus, Jamaica’s Chief Medical Officer Dr Jacquiline Bisasor McKenzie has insisted that the gear is primarily for infected persons and medical personnel treating positive patients.