Trapped on high seas - Longing for home, Jamaican ship workers split on being stuck in cabins 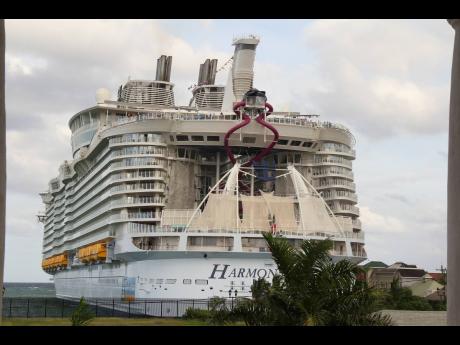 File
The Harmony of the Seas.

Linford Graham* feels like he is living in a cage while being in solitary confinement for Samantha Willis* means refuge from the novel coronavirus on the outside.

The two Jamaicans working on separate cruise ships, Harmony of the Seas and Celebrity Cruises, respectively, are on the high seas, somewhere between Cape Canaveral, Florida, and a private island in The Bahamas, neither able to come home because of the closure of the island’s ports to incoming passengers and the blow dealt by COVID-19 to the cruise industry.

Graham says that there are approximately 100 Jamaican workers on his vessel while Ellis works with about 35 of her countrymen.

The difference: Graham wants to return to his homeland and says many of his colleagues are anxious to set their feet on ‘The Rock’, too.

“I am not used to being in solitary confinement like this. I try to read as many books as possible,” he told The Gleaner. “But it is kinda like being in a gilded cage because there is no interaction.”

Graham says other Caribbean nationals are aboard the cruise ship, and the only major group that has left since the fallout are the Indonesians, whose government sent a chartered flight for them.

Trinidadians, Vincentians, and Guyanese are among the other nationalities on board.

“We have food, crew members are being situated in staterooms, and they are trying to keep us happy, but it is not the same as being with family,” said Graham, adding that social-distancing rules were particularly rigid.

“I am able to talk with my co-workers from my balcony, but the only time we have person-to-person contact is when food is dropped off to us.”

The cruise ship worker feels that the Government should have given some consideration to workers overseas before closing the borders so suddenly and wants to come home - if not by air, then sea. He said that no passenger on his boat was stricken with the novel coronavirus because of the high hygiene standards they practise on board.

The global cruise industry capsized in early March as Jamaica and other nations imposed tough protocols on health, temperature, and travel history for passengers. As countries closed their borders, the sector was virtually shipwrecked.

The Jamaican Government shuttered its ports to incoming passenger traffic at midnight on March 21 but gave a last-gasp extension, which expired two days later.

Contrary to Graham’s grim outlook, Willis, a pastry cook, said she is prepared to wait as long as the airports take to open.

Having worked with Celebrity Cruises for seven years, Willis considers the job her bread and butter, stating on her Facebook page that the shipping industry has helped her turn her dreams into reality.

“With utmost respect and gratitude, I would like to thank Royal Caribbean for taking care of us. You are our safe haven,” she wrote.

Asking for prayers, Willis, said it was a difficult time for everyone.

“Let’s all pray for the soonest discovery of the antidote and the virus to be contained and finally vanish like thin air so we can all go back to normalcy,” she said.

When The Gleaner spoke with her on Sunday, she reiterated that times like these allowed her to appreciate her job.

“I am very happy, not upset about the border being closed, because we are being treated well even in isolation,” she said.