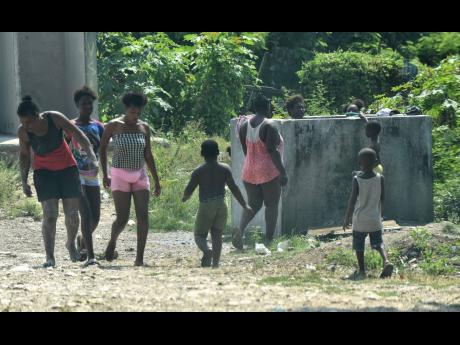 Ian Allen/Photographer
Residents of Majesty Gardens, St Andrew, bathe at a standpipe shortly before the 3 p.m. curfew deadline on Good Friday. They have complained of the indignity of showering outside and not having access to enclosures nearby.

While residents of Majesty Gardens waited anxiously at a standpipe – half-naked and hurrying to take showers before the evening curfew last Tuesday – a multimillion-dollar block of bathrooms built years ago by the Government sat in the distance unused and deteriorating.

For three years, however, the property has remained mostly unused while residents of ‘Bottom Back To’ relieve themselves in bushes and bathe at the mucky standpipe nearby. The bathroom block, they claimed, has been without running water and proper drainage since its completion.

Last Tuesday, residents said that curfews imposed by the Government to curtail the spread of the feared COVID-19 highlight more than ever their need for the premises to be opened for use.

For the past two weeks, they said, nightly bathroom runs for many means risking more than the mud and mosquitoes they have grown accustomed to on the moonlit sessions. Now, they fear being roughed up by soldiers enforcing the curfews.

“I want to know why dem come put this here, ‘cause this deh here, and it don’t serve one earthy purpose,” said a scowling Marcia*, a resident of lower Majesty Gardens, a tough enclave dubbed ‘Bottom Back To’. “It just come in like one big community ornament.”

“Memba, we nuh have nuh inside toilet, and one youth round deh suh, him go a toilet (bushes), and him go come out now innah dem (soldiers).” Marcia related last Tuesday, detailing what residents claim has been the mode of operations by the security forces any time after the 8 p.m. cut-off in recent days.

“Come in like is a ornament fi true! ‘Cause from that come lay down deh so, all now, it nuh use,” another resident chimed in as other women on the gambling corner broke into a ballad of agreement.

Another resident, who gave her name as Bridgette, expressed frustration as she made her way past the block of bathrooms to the standpipe hidden by bushes from the newly built Three Miles bypass.

There, another woman was already bathing in her underwear as a young man brushed his teeth not far away. Minutes later, a child, no more than 10, stripped off her clothes and awaited her turn to shower.

“You don’t see anything yet. Come here in the morning or inna di night before curfew ... . Man, woman, children, everybody strip naked in front of everybody a bathe. How that fi right?” said an elderly man looking on at the young girl in the distance.

Majesty Gardens is one of the political strongholds of the Opposition People’s National Party (PNP). Last Tuesday, residents there gave their representatives a tongue-lashing.

Three days later, however, Brown Burke told The Gleaner that to her knowledge, the bathroom block was operational and that she had received no complaints of water-supply or drainage issues there.

She said, however, that the entire community suffers from water shortages, noting that access to the block of bathrooms is monitored by designated residents, which has often proven problematic. She explained, too, that some women preferred to bathe at the open standpipe rather than in enclosed facilities.

“If bathing is not being done in a group, they don’t want to open the front door and go in and they are the only ones inside. Nobody can see them from outside and see what’s happening,” she said, adding that she would make inquiries into the current issue.

Brown Burke said also that she has been in dialogue with the police regarding the alleged treatment meted out to residents.