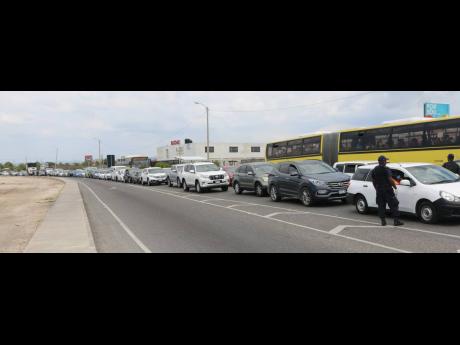 Photo by Christopher Serju
Police officers conducting checks as motorists head out of Portmore, St Catherine, yesterday. The parish is currently under a seven-day lockdown to contain the spread of the deadly coronavirus.

What should have been a routine trip to have a laboratory test done in the Corporate Area yesterday turned out to be quite a testy trip for St Catherine couple George and Cas Creary as a seven-day lockdown of St Catherine kicked in to contain the spread of the novel coronavirus.

Having left their home about 6:45 a.m., the Crearys started out travelling along Port Henderson Road, but on approaching the roundabout in the vicinity of the old Forum Hotel, they were forced to make a U-turn upon being advised that the security forces had closed off the roadway.

Two hours later, they were stuck in traffic along the George Lee Boulevard until Cas suggested that they forgo the Portmore leg of Highway 2000 and head towards the Mandela Highway.

“It was just a standstill. Nobody was moving,” George recalled. “We were there for at least 15 minutes.”

With no movement as time passed and the traffic congestion getting worse, George was sceptical at first, but with their vehicle low on gas, he finally gave in.

As they neared the final roundabout to exit Portmore, the couple encountered two security checkpoints, where they were questioned by policemen who proved to be efficient and courteous.

“We had a little hold-up, but nothing compared to what was happening with the toll road,” George pointed out. “We were stopped, and we were asked [why we were travelling] and we explained that she had an important lab test to be done, and he said, ‘Okay’, and then another half chain from there, another policeman stopped us and asked again the purpose of our travel.”

Cas found it a bit amusing when the first policeman inquired of them the area of the essential services in which they served. With her husband’s explanation and presentation of her appointment card along with her identification card, which she had at the ready, they were quickly sent on their way.

At the second stop, a policeman checked their temperature before giving them the all-clear.

Thereafter, it was smooth sailing all the way to the Nuttall Hospital in Cross Roads.

“The only time we stopped was for traffic lights,” quipped Cas.

At the laboratory, the couple was in for a pleasant surprise as George explained their travel ordeal to the technicians. They were then told that if they were willing to wait, the lab could have the results ready in a matter of hours, instead of the usual one-day wait.

By 1 o’clock, they were back home in Edgewater, Portmore.

Today, with lab results in hand, Cas will head for the Kingston Public Hospital, where the breast cancer survivor, who is undergoing chemotherapy, is due to meet with a consultant.

After yesterday’s draining travel experience, it is a journey they are dreading.