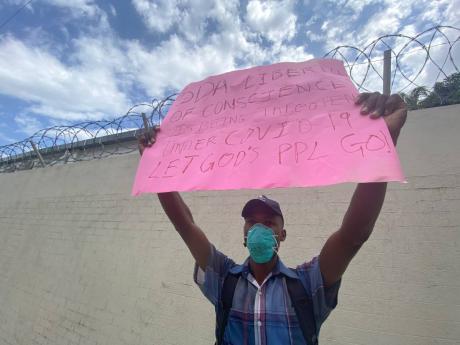 Ricardo Makyn/Chief Photo Editor
Jessie Justin, a member of the Tent City Seventh-Day Adventist Church, protesting in front of The Gleaner against the designation of Saturday as a shopping day under the St Catherine lockdown.

Though not wearing clothes made from camel’s hair, Jessie Justin bellowed yesterday like John the Baptist – a lone voice in the wilderness denouncing the Government’s selection of Saturday as the second of two days designated for shopping for residents of St Catherine under lockdown.

Standing across from The Gleaner Company’s North Street plant, Jessie Justin, a Seventh-day Adventist, called for the authorities to select another day to allow Sabbath-keeping Christians limited time to shop.

Wednesdays and Saturdays are the official shopping days for residents in St Catherine under a seven-day lockdown that might be extended.

“We are forced to shop on Saturday, which is God’s Sabbath, leaving us with only one day to shop, which is Wednesday,” he preached via a loudspeaker.

“You cannot force God’s people to shop on their sabbath. It is holy unto the Lord.”

Justin uttered a scathing rebuke to Prime Minister Andrew Holness and Governor General Patrick Allen, who both profess to be practising Adventists. Allen formerly headed the Jamaica Conference. The roadside preacher argued that Saturday was not only a day to attend church, but a day of rest.

“It is not a day to do business nor shopping. For God’s people, that is a day of holiness,” said Justin, holding a placard.

He labels the anti-coronaviruus measures introduced by the Government as a guise violating civic rights and a heavenly constitution, and he has called for the prime minister to reconsider.

SILENT ON THE ISSUE

Justin, who is a member of the Tent City SDA Church, singled out the Central Jamaica arm of the church for criticism, alleging that it was silent on the issue.

However, Nigel Coke, communication director for the Jamaica Union Conference of Seventh-day Adventists, said that sabbath keepers were appreciative of the extended time given to shoppers.

“Our greater concern is for health, safety, and the well-being of every single Jamaican in this time of the nation’s crisis. However, we would prefer if people were allowed to shop for the two days in full and during the same hours instead of the initial assigned times, excepting for the vulnerable group. This, we believe, will ease some of the overcrowding.”

He continued: “While we believe that the Seventh-day, Sabbath or Saturday, is the sacred day of worship, the person demonstrating does not speak on behalf of the Seventh-day Adventist Church in Jamaica, and we do not agree with some of his utterances,” Coke added.

On Wednesdays and Saturdays, residents can leave home to go to supermarkets, corner shops, pharmacies, gas stations, and doctors’ offices from 8 a.m. to 8:30 p.m.

The initial timeline of 8 a.m. to 5 p.m. was revised after Wednesday shopping was characterised by traffic gridlocks, long queues, and steaming customers.

Calls have also come from St Catherine South Member of Parliament Fitz Jackson for the Government to introduce an additional day to prevent crowding.

State authorities indicated, however, that limited person-to-person contact and movement were key to curbing the spread of COVID-19.