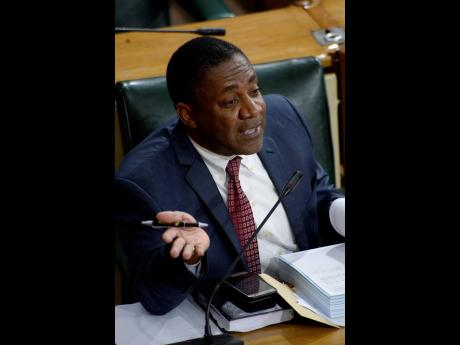 Painting a worrying picture of many Jamaicans struggling to stave off the pangs of hunger from the COVID-19 economic fallout, opposition lawmaker Phillip Paulwell is urging the Government to double the $10.6-billion aid package.

Paulwell argued that the contingency fund was woefully inadequate.

Paulwell shared with his parliamentary colleagues yesterday that he went into his constituency recently to provide care packages to the elderly and shut-ins but had a rude awakening. He revealed that the demand for packages was about 2,500 - more than three times the 700 he distributed.

“The experience of going out there reveals to me that it is not only our elderly who are in dire straits. We have a large mass of people who are growing in hunger.

“... Without there being some palliative to assist these persons, we are going to be in for serious social upheaval,” he said during a meeting of Parliament’s Public Administration and Appropriations Committee (PAAC).

Yesterday, Deputy Financial Secretary Courtney Williams told the committee that the Ministry of Finance had received nearly half a million applications for financial assistance.

He said that applications for compassionate grants, which were shut down last week owing to an oversubscription, account for the lion’s share of the requests, totalling 403,000.

At least 60,000 persons who lost their jobs since March 10, when the first COVID case was confirmed in Jamaica, applied for the Supporting Employees with Transfer of Cash programme.

Paulwell conceded that the Government’s assistance package was devised at a time when the country was unable to forecast the “dramatic impact that this virus scenario has created in our country”.

The Kingston East and Port Royal representative also wants the Government to advance half of the $20 million allocated annually for the Constituency Development Fund to enable MPs to assist “in this crisis of hunger”.

Committee Chairman Dr Wykeham McNeill said that many young persons in his Westmoreland Western constituency who operated on the margins doing odd jobs were now faced with the grim reality of not satisfying their basic needs.

“Part of the problem we have is you are telling persons to stay home, you’re telling them to shut in, [but] they have no money, no source of income. You are asking them to do the impossible,” he observed.

During yesterday’s PAAC meeting, calls were made for the finance ministry to reopen applications under the Government’s compassionate assistance programme.

Responding to queries by opposition committee member Denise Daley, the financial secretary confirmed that windscreen wipers could get assistance under the support programmes.

It was also disclosed that beneficiaries of the Programme for the Advancement Through Health and Education could also qualify for the compassionate grant.

Meanwhile, Williams revealed that there were 4,500 bar operators on the Government’s tax roll. However, Mikael Phillips, the committee member representing Manchester North West, suggested that more than 4,000 bar operators could reside in each of the country’s 63 constituencies.