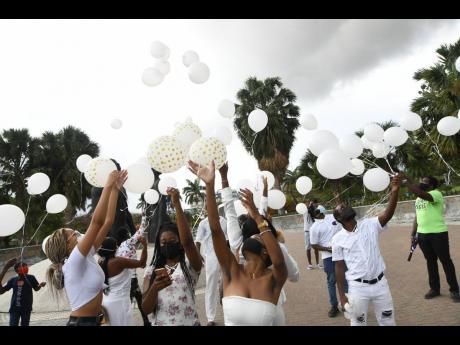 Rudolph Brown/Photographer
Family and friends release balloons in honour of the late Jodian Fearon on what would have been her 24th birthday at Emancipation Park in New Kingston on Tuesday. 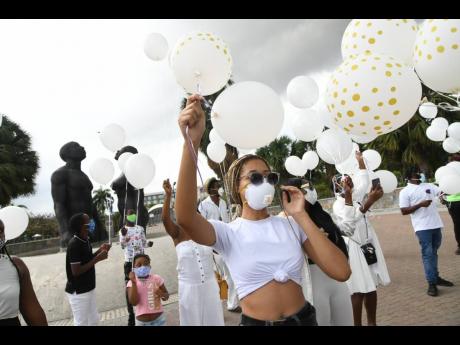 Rudolph Brown/Photographer
A well-wisher prepares to release a balloon in memory of Jodian Fearon, the 23-year-old first-time mom who died hours after giving birth.
1
2

THE SKY over Emancipation Park was decorated with white yesterday as family and friends of Jodian Fearon gathered to release balloons in celebration of what would have been her 24th birthday.

Fearon died at the University Hospital of the West Indies (UHWI) on Saturday, six hours after giving birth through C-section to a baby girl at the Spanish Town Hospital.

The controversy over her death has stoked national outrage over whether healthcare workers at three hospitals breached their duty of care.

The police announced on Monday that they are probing whether there was criminal negligence in a series of stand-offs and rejections involving personnel at the Andrews Memorial, UHWI, and the Victoria Jubilee hospitals. The health and wellness ministry has also launched its own investigation.

Ashana Raybe, cousin of the deceased, said that the family was seeking to soar on the wings of public prayer.

“Honestly, I am trying, but I must say that prayers work, because we have been receiving so many, and they are touching and the Lord is helping us.

“We just have to try and stay strong together as a family, and with our friends as well,” she said.

Fearon’s birthday celebration comes amid a tragedy that has torn the hearts of the nation, with concern emerging about whether healthcare workers may have panicked over apparent signs of COVID-19-type symptoms. The disease, which has infected nearly 400 Jamaicans and killed seven, has also triggered stigma and discrimination.

But even amid the tears at Emancipation Park, Fearon’s faithful friends and family tried to retrace happier memories.

“Jodian was this person who was so lively and full of energy,” Raybe told The Gleaner yesterday. “... She would want us to be happy, so let us be happy for her and celebrate the life that she lived.”

Ashley Martin, Fearon’s friend, said that the late university graduate was always the life of the party.

“She was so vibrant and full of life; this is what she would have wanted,” said Martin, who was one of the organisers of the bittersweet balloon release.

Martin said that the family was struggling to cope with the loss of someone special.

“We’ve lost a friend, a mother has lost a daughter, a daughter will never get the chance to see her mother, and the pain is unreal,” Martin told The Gleaner. “It is unbearable.”

Another cousin who gave his name as Shavar H. said that the family was disturbed that Fearon’s name was at the centre of a tug of war between health authorities denying culpability for her death.

“Nobody is taking the blame for whatever they did; everybody is just pointing fingers, and it just upsets us even more,” said Shavar.