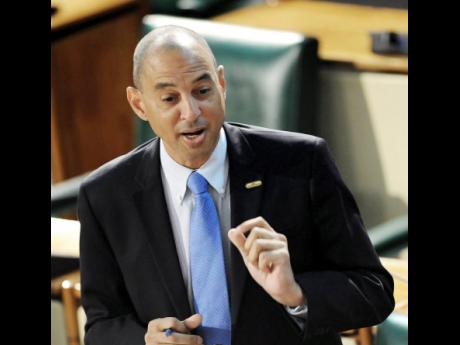 File
Senator Don Wehby: Let us make it easier to have a seamless [process].

Government Senator Don Wehby has proposed that the Government explores having Jamaicans being allowed to open bank accounts with just their taxpayer registration numbers and national identification, but cap the maximum amount of money it can hold.

Wehby noted that many Jamaicans currently do not have access to a bank account as they have been shut out by the rigorous anti-money laundering systems which are now in place.

“If we can say – and this is under the anti-money laundering and know your customer and stuff like that – that anybody who is going to set up an account, let’s say for a $100,000, show your TRN, show your government ID, and the account can be started,” the senator proposed on Friday as the Senate discussed the tourism workers’ pension scheme.

“If we had further the NIDS (National Identification System) discussion, it would be much easier to open a bank account,” he added, causing an uproar in the Upper House.

The latest Global Findex indicated that only 78 per cent of persons 15 years and over have bank accounts.

Yet, many Jamaicans do not actively use their accounts, with self-reported account inactivity rates higher than that of adults in peer countries. Twenty-three per cent of Jamaican account holders report not having made a deposit into or withdrawal from their account in the past year.

This rate of account inactivity is higher than the average in the Latin America and the Caribbean region or upper-middle income country group, both at 11 per cent.

Global Findex reported that 65 per cent of wage earners receive their wages in cash and 23 per cent of account holders do not make any deposits or withdrawals into their accounts.

The same institution said only 30 per cent of Jamaicans save through a regulated financial institution.

Wehby said the average size of a remittance is US$200.

“But listen to this, 95 cents of every US$1 of remittances is used to buy basic food – not luxury food, yuh nuh! Basic food and medication. So, let us make it easier to have a seamless [process],” Wehby said.

Wehby, the CEO of GraceKennedy, said remittances coming into the country have fallen by 15 per cent since the COVID-19 pandemic.

But the digital remittances for Grace Money Services is up 100 per cent, he highlighted.

“Jamaicans overseas sending money directly to a bank account in Jamaica is growing at over 100 per cent. So, what this is showing is that the rate of increase in terms of digital remittances is increasing at an enormous rate,” Wehby said.

“So when we talk about the CARE packages that we are giving out and people have to go to a location to pick up cash, what we need to do is to convert those CARE package beneficiaries to bank accounts,” he said in reference to the Government’s COVID Allocation of Resources for Employees Programme, which seeks to provide a financial cushion for Jamaicans affected by the pandemic. Under the programme, money is sent to the beneficiaries’ bank accounts or money services outlets for pickup.

“But if you are going to ask those beneficiaries to sign up five, six rolls of paper, they not going to do it, we need to simplify it for them to start the account,” the senator stressed.