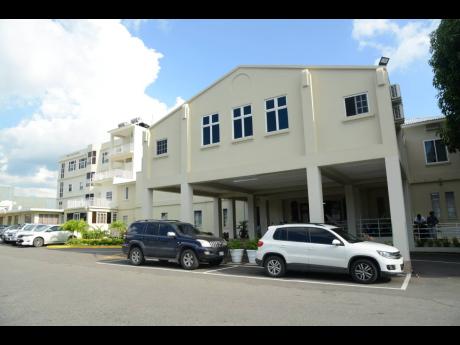 File
The Andrews Memorial Hospital in St Andrew is among institutions not appearing on the 2020 gazetted list of registered private health facilities.

Only four private hospitals in Jamaica are currently certified to operate.

The state of affairs was uncovered during a Sunday Gleaner probe into the circumstances that led to the death of 23-year-old first-time mom Jodian Fearon, hours of giving birth last week.

She was admitted at the Seventh-day Adventist Church-owned Andrews Memorial, but medics there, reportedly fearing she was displaying symptoms of the dreaded coronavirus disease 2019 (COVID-19) and sticking to their public position at the onset of the COVID-19 outbreak locally, said they lacked the capacity to treat her.

Two other hospitals – the University Hospital of the West Indies (UHWI) and the Victoria Jubilee Hospital – allegedly rejected the woman in labour, who was rescued by the Spanish Town Hospital. She gave birth there, but was later transferred to the UHWI, where she allegedly died of heart failure on the cold floor of an isolated room, according to two senior health officials who have seen Fearon’s records.

As government investigations continue into the matter, a Sunday Gleaner probe discovered that Andrews Memorial is not among the healthcare facilities on the 2020 gazetted list of registered institutions.

In fact, only Art of Surgery, Winchester Surgical & Medical Institute, Baywest Wellness Hospital and Hospiten Jamaica Limited are recognised as registered private hospitals even though the Ministry of Health’s 2016 Policy and Procedure Manual For the Referral and Transfer of Patients lists 11 such facilities – Andrews; Nuttall; Medical Associates; Tony Thwaites Wing; Hargreaves; Montego Bay Hospital; Doctors Surgi Clinic; Royale Medical Centre; Medical Care and Surgical Centre; Hospiten; and St Joseph’s, which has since been taken over by the Government.

Local private hospitals are governed under the Nursing Homes Registration Act (NHRA) of 1934, which is separate from the National Health Services Act, which regulates public hospitals.

Registration is valid for two years and generally signals that an institution has met the minimum standards in areas such as physical environment, operating procedures, equipment, patient management and staffing. A registration certificate is only granted after inspections are done and the chief medical officer is satisfied with the outcome.

According to the law, anyone who operates an unregistered nursing home is guilty of an offence and could face a fine of up to $250,000 on first breach. Continued breach can lead to imprisonment of up to three months, a fine of $500,000, or both a fine and prison time.

The Sunday Gleaner reached out to Andrews for comment on the matter, but up to press time, our questions sent on April 29 remained unanswered.

When our news team contacted Calvin Lyn, chairman and owner of the Hargreaves Memorial Hospital, he was surprised to learn that his institution was not registered, even though “the Ministry of Health has come down to inspect, and has given guidelines”.

“For it not to be registered, don’t blame me. For them not to have it, a fi dem business! It has never been closed,” he told The Sunday Gleaner. The Mandeville-based institution is one of the oldest private medical facilities in Jamaica, having been established in 1925.

The leadership of the Medical Associates Hospital in St Andrew was similarly surprised to learn that the healthcare institution was not on the list of legal operators.

“We offer all the services that every other hospital offers. I don’t understand that,” said Dr Michael Banbury, the chief executive officer. “We couldn’t operate without approval.”

However, the health ministry is saying something different.

“For all institutions, we do our visits and we give them the reports on areas or gaps and then we try to work with them to fill those gaps,” said Dunstan Bryan, the ministry’s permanent secretary, in confirming that some private hospitals are not adhering to the law.

The situation highlights a weak accountability system in which many unregistered institutions do not subject themselves to full inspections because they reportedly refuse to apply for registration and ignore warnings and reminders to regularise.

One health official further lamented that some unregistered institutions have also never been inspected because operators frown upon being classified under a nursing home law.

Still allowed to operate despite not passing inspections

Data obtained by The Sunday Gleaner through an access to information request shows that between 2017 and 2018, the Ministry of Health and Wellness’ Standards and Regulation Division conducted a total of 28 inspections, which were done for private hospitals, dialysis units and ambulatory (outpatient) facilities.

For 2017, three were recommended for registration: Elite Diagnostics, Baywest Wellness 24 Hour Urgent Care and Burlington Health, which got its recommendation on September 6, 2017 after failing an inspection earlier in the year.

For 2018, the only institution that was recommended for registration was Hospiten. The other hospital on the list, the Heart Institute of the Caribbean Heart Hospital, did not get a recommendation following a pre-inspection on August 3, 2018.

“No penalties or sanctions have been levied in the past five years under the Nursing Homes Registration Act. However, sanctions have been administered under the Public Health Act,” explained Renee Brooks, registrar of health institutions/facilities in the Standards and Regulation Division.

However, Brooks could not immediately provide details on the sanctions or the offenders.

Another senior health official, whose name is being withheld because she was not authorised to speak on the matter, said that some of the institutions which performed poorly in some areas but passed in others were allowed to operate in the areas in which they were successful.

The official also noted that with the limitations of the law, especially for institutions offering complex, specialised services, protocols have been developed to give the ministry some cover in how it inspects private hospitals.

That protocol includes a 13-page checklist for surgery centres, which covers staffing matters, such as the number of nurses, anaesthesiologists, scrub room, filing and infection control.

Brooks backed this up, stating that inspection tools are “compiled from a collection of the Ministry of Health & Wellness policy and procedure manuals”.

But attorney-at-law André Earle is adamant that there is need for stronger oversight.

“At the end of the day the nation’s health matters,” he told The Sunday Gleaner.

This oversight will ensure that “you’re not entering a situation where persons are really left just at the mercy of – I hate to say this, but – some butcher,” the lawyer said.

He added that even in the current circumstances where a number of healthcare institutions are not certified, Jamaicans can still have grounds for legal redress. This may take the form of lawsuits against institutions or complaints to the professional regulatory bodies like the Nursing Council or the Medical Council, he explained.

The issues have angered one operator of a private hospital, who suggested that the entire legislative architecture needs overhauling. He complained that successive political administrations have allowed private health institutions, especially hospitals, to operate with “very little oversight” and few incentives to change.

“The registration process is slow, outdated and unpredictable. We don’t even have a dedicated hospital law,” said the senior medical doctor, who requested anonymity.

Noting that registration fees under the NHRA is only $5,000 for institutions with 25 beds or fewer, or $10,000 for 26 beds or more, the administrator said these “meagre” costs encourage players in the sector to work with an 86-year-old law rather than advocate for its change. The fees were last updated in 2004.

“Private hospitals are making millions of dollars each year and all they need is to pay $10,000 every two years? It suits everybody for there not to be any change in the system,” he said.

Health Minister Dr Christopher Tufton, in the middle of last week’s raging controversy involving Andrews, UHWI and Victoria Jubilee maternity hospital, acknowledged that the accountability systems for private hospitals were in need of a review, while lamenting the limitations of his power as a minister to make demands.

The regulatory challenges are not new to Jamaican policymakers, however. Two decades ago, the government was told that the public health system was “supplemented by a loosely regulated private sector” in a report by the Pan American Health Organisation (PAHO). “Little, if any, organised information is maintained on the organisation, operations and other characteristics of the private health sector.”

The first such PAHO report was done in 1999, the same year the Standards and Regulation Division of the Ministry of Health was established. John Junor, the health minister at the time, told The Sunday Gleaner that the messy affairs were a result of the “reactive” nature of local leadership, of which he was part.

“There’s a tendency for us to be a reactive society and we have a kind of ‘if it ain’t broke, don’t fix it till it becomes broke’ attitude. Generally, in governance, there’s a failure to anticipate and plan, and that probably prevails in this situation.”

A response to the long-standing problems may come with the 10-year, PAHO-backed strategic plan for the health sector that Tufton launched in 2019. It includes consideration for modernising health policies, legislation, regulations and strengthening enforcement and oversight mechanisms.

But with the history of reform failures and the likely long-term negative economic impact from the coronavirus pandemic, how much will be accomplished is now a major question.