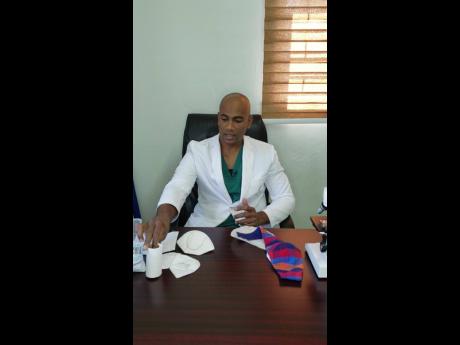 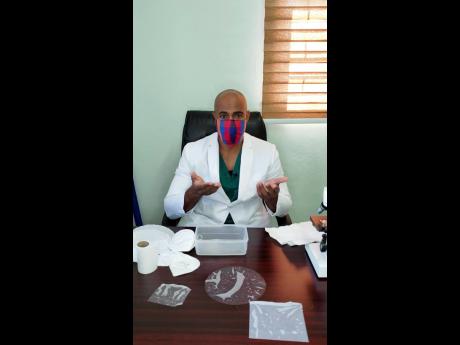 The salt filters make any ordinary cloth mask a formidable weapon against the coronavirus. 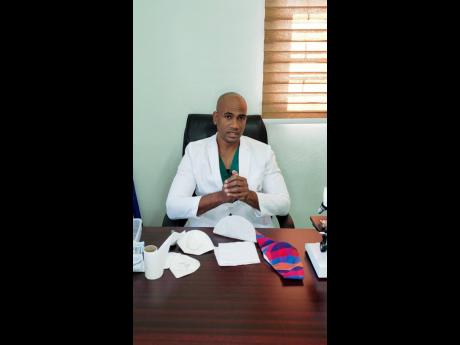 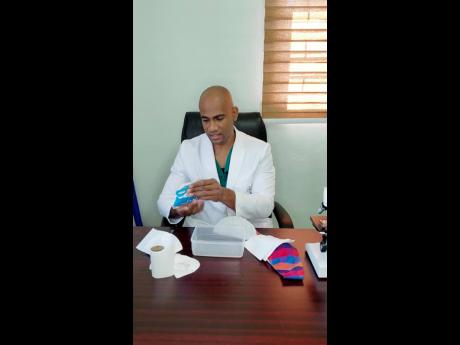 After going public a week ago with his salt filter solution for tackling the deadly coronavirus, surgeon Dr Alfred Dawes says he has been inundated with expressions of interest from across the globe.

From researchers and medical practitioners to government officials, entrepreneurs and average citizens, Dawes has been flooded with inquiries since a Sunday Gleaner exclusive detailed findings of his recent research into ways of neutralising the virus that has brought the world to its knees with the COVID-19 respiratory disease.

Dawes, who is the medical director of Windsor Wellness Centre and Carivia Medical Ltd, believes he has discovered an effective COVID-19 killer – one that utilises really the simplest of materials found around the home, such as coffee filters, toilet tissue or paper napkins, to develop a non-porous filter that when soaked in a hot table salt solution, dried, and worn beneath a cloth mask, stops the virus in its tracks.

“How it works is that as the salt crystals reform during drying, the sharp edges basically cut through the covering of the virus, on contact, like small knives, killing them in about half an hour,” the general and laparoscopic surgeon revealed last week.

And while pleased with the general response he has been getting, Dawes, who is a fellow of the American College of Surgeons and a former senior medical officer of the Savanna-la-Mar Public General Hospital, says he is not interested in commercialising the idea at this time.

“The salt filters are meant to be low cost and easily accessible by everyone who needs one,” insists Dawes, who is also a former president of the Jamaica Medical Doctors Association.

“The idea is to ensure that every single person could use the simplest of things to arm himself with an effective weapon against this deadly, invisible enemy.”

Dismissing the many proposals for partnerships to turn his idea into a business venture, the general surgeon said he deliberately made his findings public, as it was in everyone’s interest to save lives and rid the world of the pandemic that has now infected more than three million people and killed close to 250,000.

“I would rather everyone be able to make these filters than to find a way to sell them, because the faster we get out of the pandemic, the better off we will all be,” he told The Sunday Gleaner.

“There are teams in Canada with a patented method of applying the salt to the filter of a surgical mask. Their goal is to find a way to make these treated masks commercially available. But even with the funding and technical expertise on hand, they are still at least a year away from target, and we simply do not have that time,” he stressed. “So instead of focusing on trying to find a way to put the salt on a commercial filter, I approached the problem by looking for an alternate filter on which to coat the salt.”

Scientists from the University of Alberta in Canada have developed a process by which they can apply salt crystals to door handles and railings in order to kill any germs that may come into contact with the highly utilised surfaces.

Another group has been developing surgical masks with filters coated with salt as a means of protecting medical staff exposed to harmful viruses. The team has expressed optimism that the virus-killing masks will be effective in combating the SARS-COV2 virus that causes COVID-19, as they have already been proven to be effective in neutralising influenza viruses.

It is this proven technology that Dawes wants adopted and made universally available.

However, some persons have questioned the safety of Dawes’ salt filters, seeing that they are different from the masks expected to be commercially available.

“A surgical mask is essentially a filter held in place between two pieces of paper. If you make a salt filter, it will work by not only improving the ability of poorly effective cloth masks to filter out droplets, but will also kill the viruses that come in contact with the salt on the filter,” he explained.

“Removing the filter and washing the masks regularly improves the useful lives of the cloth masks and protects the wearer, as droplets can still live on the outer surface of the mask. Even if you have a filter stopping the droplets from going through to your nose and mouth, you still have to kill the viruses that remain on the exposed parts of the mask.”

There have also been concerns that breathing in salt daily would have harmful negative effects, such as high blood pressure. But Dawes believes those concerns are overblown.

“It could turn out to be quite the opposite. In fact, people have been going into salt rooms and caves for therapeutic purposes because breathing in salt was shown to improve respiratory conditions, a treatment called halotherapy,” he said.

“Persons who worked in salt mines have been shown to have less infections and respiratory diseases than others. As for hypertension, it is a theoretical risk, but it has never been shown that persons who worked in salt mines, do salt therapy, or live in salt caves had more high blood pressure than the general population, in spite of actually inhaling salt crystals over long periods.”

He also weighed in on the calls to reopen the economy and the role his salt filters could play. As part of its COVID-19 containment strategy, the Government has implemented a number of measures that have had severe economic impact on the country and its citizens.

He, however, agrees that we should begin to put in place plans to relax the restrictions.

“People have to go back to work or else it will be an economic Armageddon. How they go back to work will be the biggest challenge for the Government and private sector. I propose that we keep the mandatory mask policy in place to decrease the droplets circulating and spreading the virus and improve on the effectiveness of what is becoming the most widely used and affordable mask, the cloth mask. I firmly believe that the best way to improve these masks is to add salt filters,” he said.

“So, when we start to open back up, everyone would have some degree of protection using masks, observing proper hygiene, and continue to practise social distancing.”

Dawes added: “We have to start looking at a post-lockdown world and envision what it will look like in order to get there. Without a doubt, masks are going to be a part of that world, as it has been for the East since the SARS outbreak. What we need to do is to make effective masks for Jamaicans, and there is no better way than to use salt filters in locally produced cloth masks.

“What I would hate to see happen is that we ignore this simple solution developed locally, to our detriment, while those from other countries who have reached out to me use it to their benefit and continue to take advantage of Jamaica’s contribution to the world.”