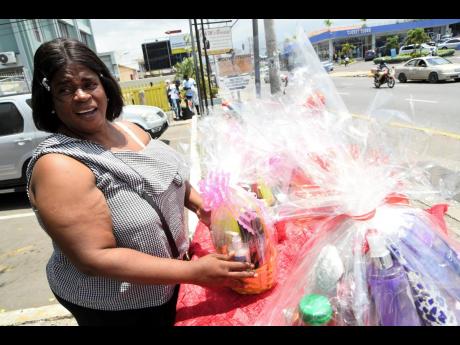 Vendors and store operators who would normally score big on Mother’s Day baskets are lamenting that the novel coronavirus has put a dent in their sales.

Kaydyonne Thomas, owner of a gift store in the Pavilion Mall, located in Half Way Tree, said that in her 11 years of business, this has been the worst Mother’s Day in terms of sales.

“For Mother’s Day usually we do between 50 to 80 baskets, now, probably about 10 we are going to be doing. Other Mother’s Day, people would start coming from in the week, even the week before we would be getting orders. I would say we doing five or 10 per cent of what we usually do.

“Typically this day usually sells faster than Valentine’s, so this is kinda shocking. Business has been slow overall due to COVID-19,” Thomas said.

Tanya Rowe, a street vendor who has been selling Mother’s Day baskets for several years, said that many people might not be aware that the day to celebrate mothers was fast approaching.

According to her, since placing her baskets on display yesterday morning, more than 20 persons have enquired about the upcoming occasion.

“More than 90 per cent of the people never know Mother’s Day is coming up. I don’t sell anything as yet but I never expect to sell anything yet. On Fridays it’s normally slow but you just have to advertise to remind the people that it’s Mother’s Day, tomorrow and Sunday is the big day,” Rowe said.

Internationally, Mother’s Day is celebrated on the second Sunday in May.