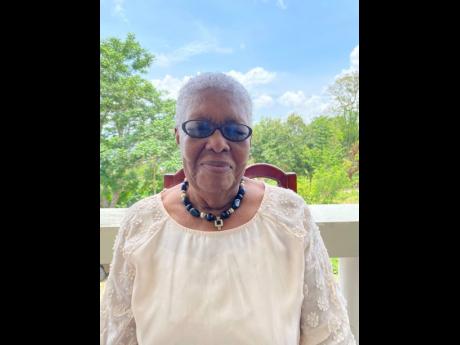 Photo by Kavarly Arnold
Judith-Miranda Townsend has taken more than 40 children into her home over the past five decades. 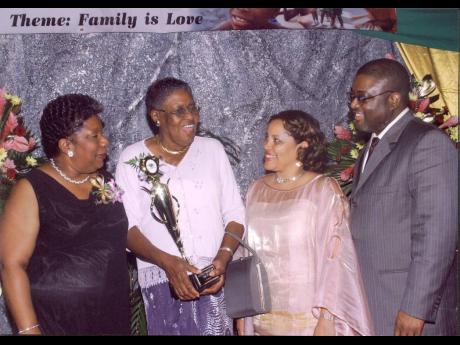 File
Most Outstanding Foster Parent: Judith-Miranda Townsend (second left) smiles brightly as she embraces her award in this 2006 file photo. Sharing the occasion are (from left) patron of the foster care campaign and director general in the Ministry of Industry and Tourism, Carole Guntley; Alison Anderson, CEO of the Child Development Agency; and William Bell, guest speaker for the evening and president and CEO of Casey Family Foundation in Washington. 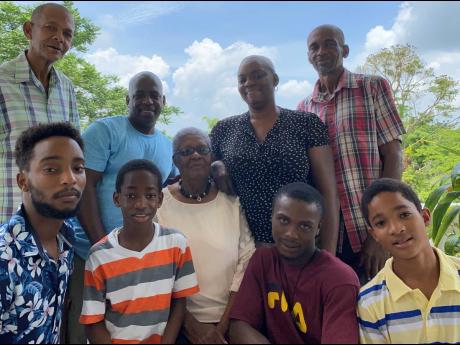 To say Judith-Miranda Townsend has a special love for children would not even begin to capture the essence of the Westmoreland supermom.

Affectionately called ‘Mama Sweetie’ by foster children and members of the Holly Hill community in Darliston, Westmoreland, the 89-year-old has fostered more than 40 children, and her love for them has kept her always willing to provide a warm environment for them for more than 50 years.

The former basic school teacher and postmistress in the rural district has been a foster mother for most of her life, after her first adoption in 1965. She went on to nurture some 20 wards of the state, as well as taking into her home more than 20 others from family members and the community over the years.

“ I love children, especially boys. Whenever there is a child that they (State) can’t place, they always call and ask for my help. If it was not for the children around, I don’t know if I could go on,” Mama Sweetie told The Sunday Gleaner.

“I try to help every one of them. I send them to different schools, and after they leave [high school], I try to see that they go on to something, whether trade or so, to help themselves. None of them ever have to go through the door to a neighbour’s house and ask for a day’s work to get a shilling. Anything they need I always try to give them,” she added.

In 2014, Mama Sweetie was presented with a Badge of Honour for Long and Faithful Service to the child protection sector at a the national honours ceremony at King’s House. In 2006, she was also named the most outstanding foster parent by the Child Development Agency (now Child Protection and Family Services Agency).

The octogenarian is still taking care of children, with her last foster child being 11 years old, after her daughter, Jacqueline U. Townsend, who is following in her footsteps, encouraged Mama Sweetie to take her in permanently after the young girl spent a short time with them.

She admits, however, that there is a great difference between raising a child back in the day and now.

“I don’t think I could manage them now because these children today are different from the ones we foster before. Children are not obedient anymore and also time is harder,” she said, although she added that with her sons being farmers, it makes the job a bit easier.

Her sons, Collie and Audley, who were the leading males in the children’s lives after their dad passed away more than four decades ago, explained that treating foster children as relatives was key to remove stigma and break down walls in their new families.

“In the initial stage, with the government ones, there was this stigma that because they are taken from children’s home, they were termed as ‘bad pickney’. Back then – and even a little now still – people see them as ‘government pickney’, so they are to be treated a certain way. However, after coming into our family setting, everyone was treated equally, and gradually the stigma disappeared,” said Collie, who is a former principal of Barneyside Primary School.

“When these children realised that they are accepted and treated like family, they then come to the realisation that they are worthwhile and can contribute to society,” added Audley, who himself is a former principal of Holly Hill Primary School. “It shows that all they need is a little care, because for most of them, it’s just that their parents cannot take care of them.”

Mama Sweetie said that many of her foster children have shown their appreciation for her helping to shape their lives and they drop by when they can.

The name which stood out most as she recalled her foster children was Marlon Tingling, who she says visits every so often and had stopped by just days ago.

Tingling, 54, who is more popularly known in western Jamaica as a journalist and public relations practitioner, was adopted at two years old, along with his sister, Jacqueline.

“It’s maybe one of those dreams that you didn’t want to wake up from,” he said of being welcomed into Mama Sweetie’s family. “Bottom line is that you don’t miss biological parents when you have her. She went over and beyond and is one of those persons who sacrificed a lot for us. We were [sometimes treated] even better than the biological ones. She wasn’t just kind-hearted to us, but everybody who has met her.”

He is calling on other Jamaicans to reach out and foster children if they are able to.

“It’s not for personal gratification as you don’t get anything out of it, but the joy of seeing the persons around you that you have nurtured from humble beginnings grow into nation builders [is immense],” he said. “There are some who would have passed through those doors and have just moved on, but for those of us that have stayed by her, I guess it is the gratification that warms her heart.”

Keithie Murray, a 24-year-old former ward who still resides with Mama Sweetie, expressed appreciation for her devotion, and said he will always try to return the favour.

“To tell you the truth, if it wasn’t for her, I probably wouldn’t be here right now. My mother has eight of us and couldn’t take care of us. Right now, about four of them were also in state care, so it’s a good thing I was here,” he said.

“I will always do my best to help her in whatever way I can. I owe it to her,” added Murray, whose admission to the HEART/NSTA Trust Ebony Park Academy in Clarendon has been postponed due to the coronavirus pandemic.