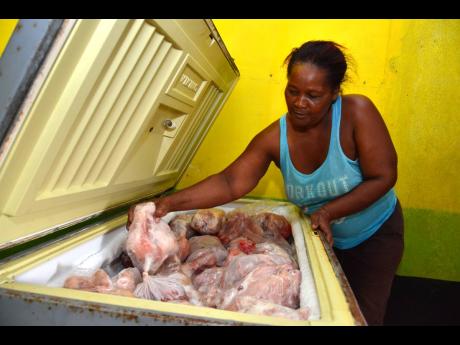 Kenyon Hemans/Photographer
Doreen Shaw, chicken farmer in the rural St Catherine community of Mexico, shows a deep freeze full of poultry. Shaw is facing a shortfall in sales because of restrictions on movement linked to the outbreak of COVID-19.

The Government has come under fire for perceived excessively long coronavirus containment measures that have damaged the economy, haemorrhaging hundreds of thousands of jobs and blowing an $81-billion revenue hole in the 2020-2021 Budget.

Financial analyst Dennis Chung said that despite attempts by the Government to reinvigorate the economy, he expects a sharp 10 per cent contraction, nearly twice the projection made by Finance and the Public Service Minister Dr Nigel Clarke in Parliament as he tabled the First Supplementary Estimates yesterday.

Chung argued that the information that has come from the scientific community has been stoking fear rather than educating Jamaicans on how to rationally manage the disease.

“Eighty-five per cent of people have mild symptoms or no symptoms. How is that any different from many other viruses out there?” he questioned.

Jamaica has recorded 509 coronavirus cases, with nine related deaths. One hundred and thirteen patients - representing 22 per cent of infected people -have recovered.

Commenting further, Chung said that despite plans to ease some restrictions and kick-start the economy, the unemployment woes would still linger for a while.

“It’s a no-win situation, really, and my disappointment is that they didn’t think about this from the start. The fact that they are opening back up now, what it is showing me is that everything that we have done to damage the economy is in vain.

“We still have the coronavirus. It is not going anywhere,” said Chung, noting that local health officials are now admitting that the “virus will be with us for a while, so we have to learn to live with it”.

“I have always been saying that we need to coexist with the thing.”

Chung, who sits on several government and business-sector boards and is a former chief executive of the Private Sector Organisation of Jamaica, maintained that he had suggested that when the first case emerged in Jamaica on March 10, the country should have been locked down for two weeks and steps taken to trace and eliminate the virus.

He said that following that exercise, the economy should have been reopened because tourism and remittances would have been lost anyway.

Projections of dramatic shortfall in government revenues and huge cuts in capital expenditure, among other far-reaching changes to the current budget, come as no surprise to University of the West Indies (UWI) economist Peter-John Gordon.

Gordon told The Gleaner yesterday that the economy’s downward spiral, owing to the effects of the COVID-19 pandemic, would trigger a massive dip in tax revenues.

The UWI economist observed that the tourism sector, which represents a significant portion of Jamaica’s GDP, has been shut down, causing a trail of lost jobs and shrinking tax intake.

Gordon said that he also expected a reallocation of resources from capital to recurrent expenditure.

“None of that is surprising,” he said.

The economist indicated that the cuts in capital expenditure would also facilitate spending on the poor and those who have been left unemployed by the rampaging pandemic.

And, with a general election constitutionally due by 2021, it appears that the governing party might not have much wiggle room in the run-up to national polls in the wake of COVID-19 and its deleterious impact on the economy.

Meanwhile, Chung said that restructuring the agricultural sector, with the Rural Agricultural Development Authority redistributing goods from hotels to the local economy, should have been implemented early.

He said that a tax incentive should have been put in place to reduce the GCT on locally consumed goods, encouraging consumption.

“But we have basically gone through a little over two months of pain that really wasn’t necessary.”

He, however, credited the Government for not imposing an absolute lockdown of the economy.