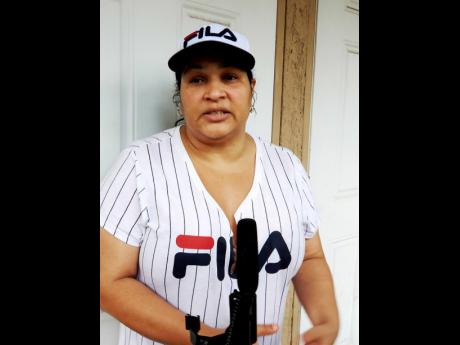 PHOTO BY CARL GILCHRIST
Carlene Smith said that her asthmatic goddaughter was forced to sit in a parked bus for hours and was unable to receive a nebuliser until the arrival of Health and Wellness Minister Dr Christopher Tufton. 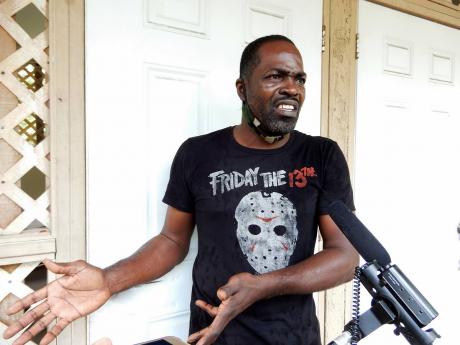 PHOTO BY CARL GILCHRIST
Shervin Smith drove from Hanover to St Ann to bring food to his quarantined aunt. 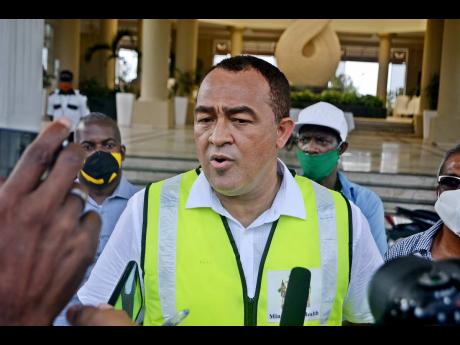 But one high-profile entertainment personality has described the treatment of quarantined Jamaicans as “worse than prison”.

The food fiasco overshadowed the country’s first recording of zero coronavirus cases in 24 hours in over more than 50 days.

The prime minister dispatched Tufton to tour the hotels accommodating a total of 465 people, many of whom complained about a raft of inconveniences that have embarrassed the Holness administration.

Tufton’s apology, made to reporters in St Ann, came just an hour before Prime Minister Andrew Holness issued one of his own “to every returning citizen who has had to endure less-than-favourable conditions”.

Relatives of quarantined guests blasted the authorities for their management of accommodation and food arrangements days after Holness said at a Jamaica House press conference that “if persons are looking for something to complain about, it will always be found”.

Accommodation and food for the initial batch of 330 returning Jamaicans will cost taxpayers $64 million, but that toll does not include security, healthcare, and other expenses.

Holness, in a statement from Jamaica House some time after 6 p.m., acknowledged that the difficulties “relate primarily to delays in the admission process at the quarantine facility and the lack of timely provisions of meals”.

The Government attributed the breakdown to capacity issues and unforeseen circumstances such as weather and a power outage against the background of hysteria and stigma.

Tufton said that his ministry would immediately begin fast-tracking the recruitment of additional personnel, with the aim of doubling the number of persons responsible for serving meals.

It is understood that the hotels were contracted to prepare the meals but that the Ministry of Health was tasked with employing servers.

Carlene Smith, better known by her moniker ‘Dancehall Queen Carlene’, was one of several persons who turned up at the Bahia Principe Hotel with supplies for relatives yesterday.

“My goddaughter is here. She flew in yesterday from Florida to be quarantined,” Smith told The Gleaner. The flamboyant retired dancer said that her goddaughter, who is asthmatic, was made to sit in the bus for three and a half hours before being placed in a room.

“She has not gotten anything to eat since yesterday, 12 o’clock. She’s terrified. She’s not accustomed to this type of treatment,” Smith added. “She didn’t know she was coming into a prison system. This is even worse than a prison system because in a prison system, you have a time scheduled for breakfast, lunch, dinner.”

Her anxiety was compounded because of a mix-up in Florida that led to her relative losing her nebuliser. But having taken one for her, she was made to keep it in her possession for over an hour as the security officers were not able to make the delivery.

It was Tufton, who, upon arrival, took the nebuliser to her goddaughter, Smith said.

Shervin Smith drove all the way from Hanover just to get food to his aunt, who was quarantined at the hotel.

“When she called and the anger mi have inna mi, mi haffi come up here. She suffering from gas because she inna the place how much hours and nuh eat,” a clearly upset Smith told The Gleaner.

“Mi haffi come dung yah so. She say she finally get something fi eat and it wasn’t even decent food.”

Smith chided the authorities for their handling of the matter, asserting that “foreigners get better treatment than we in Jamaica”.

“Yuh can’t have people a come a Jamaica a quarantine and yuh nuh prepare. Either yu prepare dem family and say, ‘All right, you need to bring this and that.’”

Holness said that more than 8,000 Jamaicans have applied to return home through the JamCovid19 app but revealed that the country has reached its quarantine capacity, adding that the country could not accommodate a sizeable cohort before the next 14 days.

“We continue to manage this process in a manner that keeps all Jamaicans, both those on island and those overseas safe. ... I wish to assure all Jamaicans overseas who wish to return home that your Government is working assiduously to get you back home as soon as possible.”

Addressing reporters after touring both the Jewel Paradise Cove, where 120 persons are being confined, and the Bahia Principe, which houses 345 others, Tufton told reporters that institutional quarantines were a “big task” that required much manpower.

“Public health has had to be supported by other agencies because we’ve reached a level that has really stretched the limit of public health,” Tufton said, suggesting that public-health officers, nurses, and inspectors were suffering from burnout.