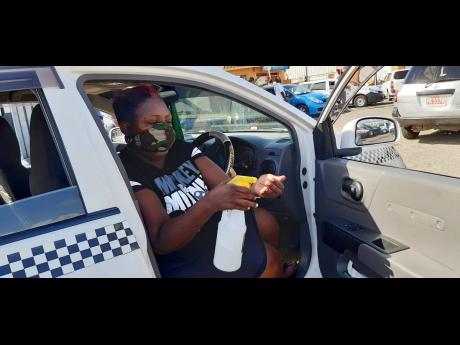 Photo by Corey Robinson
Taxi operator Charmaine Legister sprays alcohol on her hands outside the Portmore Mall in St Catherine. Legister, a lupus patient since 1997, said she has employed increased safety measures since the COVID-19 outbreak.

Charmaine Legister is vibrant, straightforward and wraps almost anyone who enters her taxi in her charm.

These qualities, she told The Sunday Gleaner, are key ingredients behind her successful enterprise even as many of her male colleagues plying the Waterford to Portmore Mall route in St Catherine are haemorrhaging from a drastic decline in passengers since the COVID-19 pandemic gripped Jamaica.

Her love for people fuels her cab as passengers are usually in for a joyous ride with non-stop laughter. This has forged a loyalty and patronage between them, which has helped Legister to thrive in the harsh COVID-19 economic climate.

“Me make more money when the place did under lockdown the other day than any other time,” Legister said as she spoke to The Sunday Gleaner on a trip from Portmore Mall to Waterford last Thursday.

“[On] Thursday, me will lie down in my bed a watch TV or a do something, and Friday, me come back out, same thing … . Me have my customers because I take care of them,” she said matter-of-factly, adding that she has been operating the route for decades and has owned a dozen taxis over the period.

ALL ABOUT THE PASSENGERS

“A lot of the taximen out there, the car is not theirs, so dem don’t handle the people dem properly. It is all about the money for them. For me, it’s all about my passengers,” she explained.

“Is Waterford I live. I don’t operate anywhere else because I fear them take me ‘way and bite me up,” she said, sending passengers into laughter. “I don’t stray, … and I have lupus so if I catch it (COVID-19), I [would] just say my goodbyes.”

Legister was among several taxi operators and commuters inside the Portmore Mall who last week were shocked by a breakdown of the Portmore communities with confirmed coronavirus cases. Greater Portmore topped the list with 22 cases; Waterford, 19; Gregory Park and Independence City, 10 each; and Passage Fort and Bridgeport with nine cases each.

St Catherine has registered the most coronavirus cases since March 10, when the virus surfaced locally. Yesterday, the number of confirmed cases in the parish stood at 294 with the national tally at 517.

Legister said that one of her favourite passengers, who worked at the Alorica call centre to which the lion’s share of cases in the parish has been linked, tested positive for the virus.

Cases like these bring trigger more intimate fears, and while Legister said she cannot support discriminatory and scornful persons – including taxi operators – who may shun victims, she is not taking any chances.

“I can’t afford to catch it (COVID-19) because it affects the immune system, and as me tell you, me old. Me a 50 and me have it (lupus) from ’97,” she said, pointing out that the autoimmune disease affects her joints and so she needs constant painkillers. “But I have to come out here and work. I can’t afford to give nuh man my car for them to mash it up and treat me people bad.”

Government restrictions on the number of passengers who can travel in taxis, in order to limit the spread of the deadly virus, have driven some cabbies who would normally ply the Gregory Park and Greater Portmore route to switch to providing chartered services outside the municipality.

The closure of at least 10 stores and a dampening of the usual hustle and bustle at the Portmore Mall have also done them no favours, they said, although a drive-through at the shuttered Mother’s restaurant conveniently served as a loading bay for some on Thursday afternoon.

‘Loadermen’ and drivers still jostled for passengers, pulling persons into vehicles, even though they emphasised heavy sanitation and wore gloves inside the cars.

“If you don’t travel with your sanitiser as a taxi driver right now, it’s like is a death sentence you calling down on yourself,” proclaimed Richie Richards, who operates on the Greater Portmore route, adding that the current climate has been the toughest ever for him and his colleagues on that route.

Bus and taxi operators are likely among the 502,558 applicants from St Catherine who applied for Government’s COVID-19 Allocation of Resources for Employees (CARE) programme. They are to receive grants of between $25,000 and $40,000.

Such assistance would go a long way for transport operators across the board, according to newly elected JUTA Montego Bay President Simon Lawrence, who claimed that with the closure of the tourism industry, his members are among the hardest hit in the transportation sector.

Sophia Campbell, president of the Route Taxi Association of Jamaica, believes the sector may not recover until late in the year. Adding to their stress now, she said, is that taxi drivers who do not operate their own vehicles are facing a challenge in accessing government aid.

“It is particular difficult for them because they don’t have a road licence to tie them to [the job] or have a payslip to show how much they work. They are asked to do self-filing and a lot of them would not have done that,” she explained.