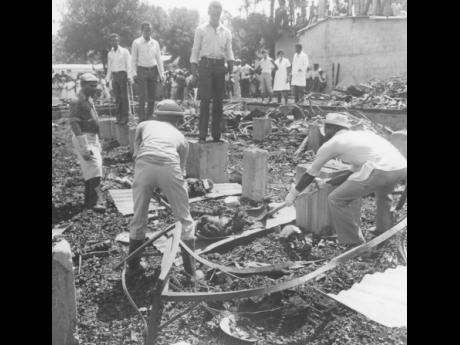 File
Workmen shovel the remains of victims of the Eventide Fire of May 1980.

THE NO. 43 Jamaica Omnibus Service (JOS) bus that plied the route from Red Hills Road to downtown Kingston was filled with schoolchildren and civil servants on Tuesday, May 20, 1980.

The bus was heading for the usual Slipe Pen Road bus stop that is still about 30 metres across the entrance of the Eventide Home.

The first sign that something was very wrong was the thick, acrid smoke billowing above Lyndhurst Road and Calvary Cemetery.

The bus ploughed through the smoke and was stopped by a policeman dressed in khaki with arms flailing in what seemed to be a tiresome bid to divert traffic.

The bus was ordered to continue straight ahead and stop across from Modern Furnishing Company.

Repulsive smoke stung the nostrils and eyes of passengers. The Tuesday morning smell was fetid.

“The smell of burning flesh was putrid and I smell it to this very day,” said Paul Nicholas, who was a 16-year-old schoolboy at the time.

He, along with students from Wolmer’s Boys’ and Girls’ schools and Kingston Senior, would disembark at the Slipe Pen Road bus stop.

“I remember hearing some sounds like something would pop open. When the bus was trying to reverse, I hear so many, I corked my ears. Later on, I read in The Gleaner newspaper during the reports that apparently it was the skulls of the victims that burst,” he recounted.

It was some time later that the death count was tallied and more than 140 destitute and physically challenged women who resided at the state-run Eventide Home perished in the early-morning fire that spread rapidly through the board structures housing them.

“I was in Barbados at the time lecturing at Cave Hill. I convinced my wife that I would only come back to Jamaica for two years so that I could get to practise law here. But when I came back, I didn’t leave again,” recalled Delroy Chuck, the current minister of justice.

“It was a sad chapter in Jamaica’s life. The country was mashed up, and to the best of my recollection, it was being seen as a political issue. I can’t say if there was ever any proof,” said Chuck.

Ardenne High principal Nadine Molloy said that she was a seventh-grader at Marymount High at the time.

“I don’t remember a lot, but … I remember a radio programme where a fund was started to rebuild the home,” she recalled.

The charred remains of 145 women recovered at the scene were interred at the National Heroes Park in a mass grave.