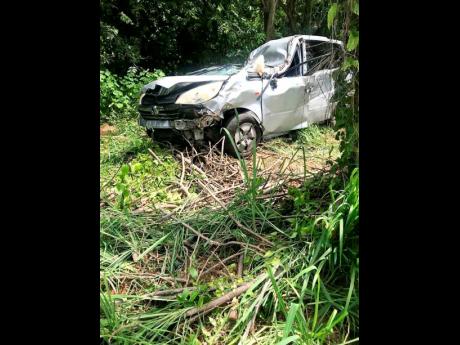 Photo by Hopeton Bucknor
The Honda motor car in which the six persons were travelling.

A St James elderly couple and their grandson became the latest road fatalities in western Jamaica on Tuesday when they perished in a motor vehicle crash along the Paradise main road in Westmoreland.

Three other family members, including a three-year-old child, who were in the ill-fated vehicle, also sustained injuries in the accident and are currently hospitalised.

The deceased have been identified as 80-year-old landscaper Neville Haughton; his 82-year-old housewife, Iris Haughton; and their 35-year-old grandson, Conroy Beckford, a barber, all of Gordon Crescent in Granville, St James.

Another grandson and his common-law wife, as well as their three-year-old daughter, were all admitted to the Savanna-la-Mar Hospital with various injuries.

Reports from the Savanna-la-Mar police are that shortly after 2 p.m., the family was returning home to St James from their farm in Westmoreland in a grey Honda Stepwagon motor car, which was being driven by Beckford. Upon reaching a section of the Paradise main road, the right rear tyre blew out, causing the driver to lose control. The vehicle ran off the road, overturned, and slammed into a large tree.

Beckford and his grandparents died on the spot. The other three persons were rushed to hospital, where they were admitted.

Family and residents who gathered at the deceased’s house yesterday were still in shock as they mourned the tragedy.

“They were the nicest couple you could ever find. Both of them have been together for as long as I can remember, and dem was a Christian couple who were deep in faith at the Granville Seventh-day Adventist Church,” said Moodie.

Since the start of the year, Westmoreland has recorded 20 road accidents, which have resulted in 21 people being killed.

A total of 46 people have been killed in 42 road accidents across western Jamaica since the start of the year.