Quarantined flight returnees ‘pushed to back of the line’ 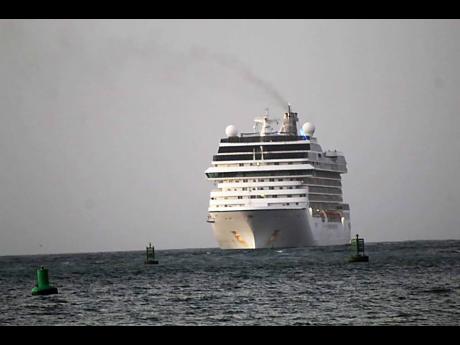 Contributed
This Norwegian Cruise Line vessel docked in Falmouth yesterday evening with 174 Jamaican crew members aboard. They will be tested for COVID-19 and quarantined.

THE 200 Jamaicans who arrived via air from New York and Fort Lauderdale on May 13 are accusing the Government of giving preferential treatment to the 1,044 Adventure of the Seas cruise ship workers who have already been processed a mere week after docking in Falmouth.

The nationals being housed at the Bahia Principe hotel in St Ann were expecting their second COVID-19 test on Monday, but no one from the Ministry of Health & Wellness turned up, they told The Gleaner.

“So far we have done one test, which came back negative. The second test would determine who departs for home this Thursday, May 28,” one of the persons under quarantine lamented.

“Because we are 200 in number, and the cruise ship had over 1,000 voices with bigger influence on the media, they were out of here in three days, although they came long after we did.”

While quarantined persons generally must return two consecutive negative results before discharge, it is unclear whether the Adventure crew members were double-tested before being released.

All ship workers have disembarked the Adventure and hundreds who tested negative have been released to self-quarantine at home. They are reportedly being tracked by geo-fencing technology.

Frustrated by what they described as miscommunication, the New York and Fort Lauderdale group said they have been cooperating with the authorities throughout their quarantine period because they understood the process.

“However, I thought we were all Jamaicans. We were stuck in our rooms in the US, and they were stuck in their cabins on the ocean. All of us want to go home, because we, too, have been away from our homes for a very long time,” a Jamaican national said.

The returnees requested anonymity for fear of victimisation.

They are fearful that with a ship docking in Falmouth last night and another due today, they will become the forgotten lot.

“We have been pushed to the back of the line, as if we are not important,” a spokesperson for the group said.

When contacted last night, Health and Wellness Minister Dr Christopher Tufton sought to assure the quarantined group that they would leave by Wednesday. The minister said that they would be sampled on Tuesday.

The Office of the Prime Minister announced that the Norwegian Cruise Line, with 174 Jamaican crew members, docked in Falmouth yesterday evening. The Carnival Glory will also return home approximately 240 Jamaican crew members this morning. A Disney vessel is also slated to berth on May 29 to disembark more than 400 crew members.

One hundred and eighty Colombian nationals will also be transported via a secure corridor to a waiting charter flight at Sangster International Airport to be flown back to their home country.

Approximately 2,000 Jamaicans who have applied for re-entry through the JamCOVID app will have been repatriated by this week.