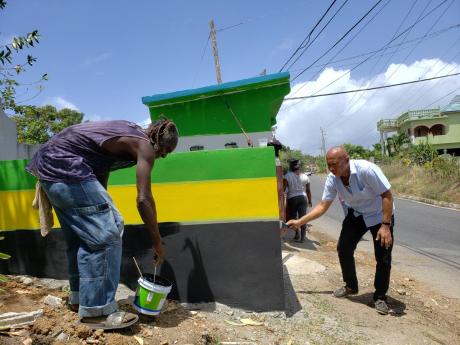 THE ST Thomas Municipal Corporation has moved to address long-standing complaints by residents of Leith Hall and Airy Castle about inefficient garbage collection.

The local council engaged residents of the community on Labour Day yesterday in the building and painting of receptacles.

“We are here today to witness the completion of the garbage receptacles, one in Leith Hall and one in Airy Castle. These communities, over the years, have been raising the issue about the lack of garbage collection on a timely basis,” Morant Bay Mayor Michael Hue told The Gleaner.

The rub of the problem, Hue said, was that trucks found it difficult to navigate the terrain.

“What we have provided for these communities are holding areas, that if the trucks don’t come on time, there is a facility that the people can use to dispose their household garbage until collection day, and that when the truck comes, there is easy access for them,” Hue said.

The mayor said that additional receptacles would be built in various communities throughout the year.

In the meantime, Hue is appealing to residents to cooperate with the National Solid Waste Management Authority and adhere to proper garbage disposal guidelines.

“We have also placed a number of drums inside the receptacles which will ultimately make the collection process easier and cleaner,” he said.

In addition to the garbage holding areas, the St Thomas Municipal Corporation also spearheaded the completion of a bus stop in Prospect.