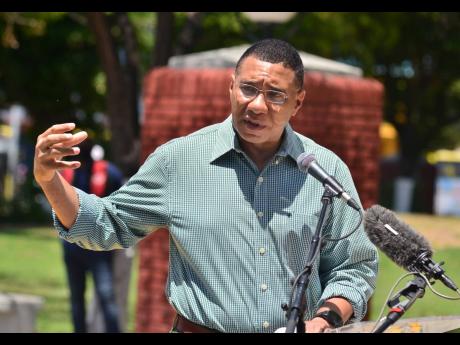 Kenyon Hemans/Photographer
Prime Minister Andrew Holness speaking at the launch of the national Labour Day project at St William Grant Park in downtown Kingston on Monday, May 25. The prime minister has not yet named a date for the reopening of Jamaica's borders to inbound passengers.

TOURISM LOBBYISTS are not easing up on the Government, saying they “expect” a final position by May 31 on the reopening of borders to incoming passengers, after Prime Minister Andrew Holness gave away little as he addressed the public five days before current restrictions expire.

Omar Robinson, president of the Jamaica Hotel and Tourist Association (JHTA), said there is expectation among his 280 membership for Holness to quickly indicate a way forward that favours border reopening.

“We must now learn to live with COVID-19,” he told The Gleaner, pointing to the penniless pockets of tens of thousands of dislocated workers who have not seen a payslip since March.

“We need to return the 300,000 persons directly and indirectly employed. We need to ensure that they are able to take care of the well-being of their families,” Robinson said.

Tourism Minister Edmund Bartlett has told international media that the Government was working towards a “summer opening” between June and August, but he gave no exact restart date.

Sandals Resorts International, one of the biggest hotel chains in the region, has been advertising a June 4 resumption date for most of its operations. St Lucia, the US Virgin Islands, Antigua and Barbuda, and Aruba are planning for travellers on June 1.

Holness signalled yesterday evening the apparent wrestling the Government is having with a major foreign-exchange earner needed to bring respite to a battered economy, science, and the development of appropriate protocols to welcome visitors.

“We don’t want to survive the epidemic and die in the recession,” he said during a virtual press briefing from Jamaica House.

NOT THE BEST PLACE

Jamaica’s COVID-19 infection rate is now at 0.8, which means, the prime minster said, “one infected person infects one other person on average. It is not the best place to be; we want it to be significantly below one.”

But that rate is trending down, having been as high as 2.2, and the fruits have been seen in the gradual relaxation of restrictions on community bars, churches, and the soon-to-be lifted work-from-home order.

“If our numbers start to rise significantly, we will tighten up again,” Holness warned, however.

More on the thinking in Kingston came from CARICOM Chairman Mia Mottley, the prime minister of Barbados, who reportedly told the BBC that governments were working to have tourism sectors functional in weeks.

Most of the visitors expected are from North America and mainly the United States, which leads the world in the number of people with COVID-19, and the most deaths.

The Private Sector Organisation of Jamaica has demanded a timeline from the Government on the resumption of incoming air and sea travel.

On the repatriation of Jamaicans stranded overseas, Holness said that 220 citizens are expected to return by air in the next seven days and an intensification to return “as many Jamaicans” by the first week of June.