Bodies believed to be missing Hanover trio’s found in sinkhole 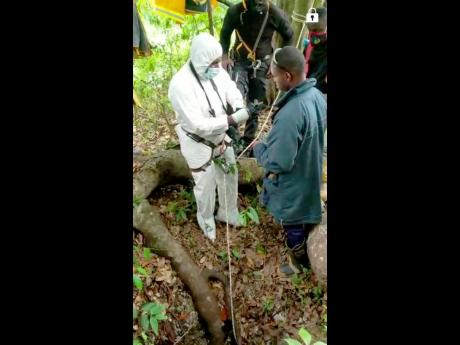 Contributed
A search crewman prepares to descend into a sinkhole in Phoenix Town, Hanover, on Wednesday.

Three bodies investigators believe to be those of men who went missing after they were ambushed by gunmen in Green Island, Hanover, on April 22, were found in a 40-foot-deep sinkhole in Phoenix Town yesterday.

The gruesome discovery was made by the police and firefighters who were conducting a search for Juvane 'Indian' Anderson, Chescott 'Chris' Douglas, and Sean Russell, three of four men who came under heavy gunfire. The fourth man, who suffered gunshot wounds but managed to escape, recounted details of the incident.

"Based on the information that we already have, we are, basically, satisfied that these are the men we have been searching for," said an investigator, who requested anonymity because he was not authorised to speak to the press.

Yesterday, members of the police's forensic team and the Hanover Fire Department climbed down through an opening in the underground cave, where they stumbled upon the decomposed bodies. It took the team several hours to remove the remains.

According to reports, on April 22, four men travelled to Green Island, where they had made arrangements to purchase motorcycles. However, they were ambushed.

Brenda Chambers, aunt of one of the missing men, told The Gleaner that she was convinced that the remains are those of her nephew and his two friends. She says the family can now get closure.

Chambers said that the families would be relieved to offer the deceased a proper burial.