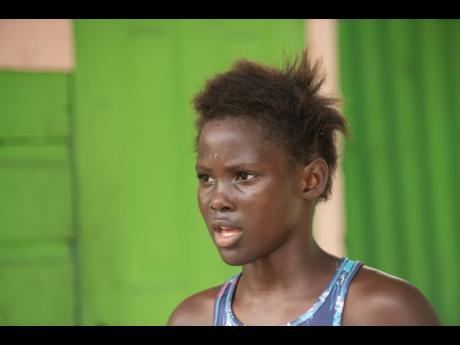 Eleven-year-old Rogeena Fearon of Charles Street, downtown Kingston, proves that she is a friend in good and bad times.

When her friend, nine-year-old Preanka McFarlane, a grade-three student at Denham Town Primary School, lost her home in a fire on Pink Lane earlier this week, Rogeena was there not only to console her, but to help in the restoration efforts.

Five dwellings were destroyed and three damaged on Tuesday, leaving 16 adults and eight children displaced. Loss is estimated at $8 million.

On Thursday, Rogeena, who is nicknamed ‘Summer’, was among several children and adults seen clearing charred debris.

She said that she had been involved in clean-up work at the site since 7 a.m.

“Mi tired, mi thirsty,” Rogeena exclaimed while fanning herself to get relief from the sweltering sun.

The sixth-grade student at Denham Town Primary, who lives a stone’s throw from where her friend’s house was located, is heartbroken.

“Mi bawl when me hear di house bun down. I feel sad. Mi want she get back her house and her tings dem and her books,” she said.

With no access to online classes because her mother was away with the only cell phone, Rogeena planned to spend the day with the clean-up crew and catch up on her school work in the evening.

Eager to help her friend, Rogeena has reached out to her grandmother living in Canada to send clothing and other items for the fire victim.

Prior to the fire, Rogeena said, she would visit Preanka every day to play Ludo, hide-and-seek, and the card game ‘pass round donkey’.

They have known each other all their lives.

“She is helpful, kind, and nice,” she said of Rogeena.

Rogeena’s mother, Lavern Riley, a market vendor, concurred that her daughter was a very kind and considerate child.

“She is always helping. When bad things happen to people, she is always asking how she can help. Everyone in the community loves her,” Riley said.