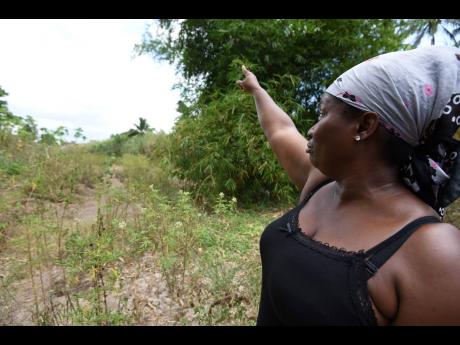 Ian Allen
Nadine Burke, a resident of Nightingale Grove in St Catherine, says the gully behind the scheme has not been cleaned for some time now and with the hurricane season beginning on Monday, she is scared that the area could be flooded.

AS THE 2020 hurricane season begins in another two days, residents of Cedar Avenue in Nightingale Grove, St Catherine, have reflected on some scary experiences they have had in the past when heavy rains pounded the country.

For years, Cedar Avenue residents have been hit hard by flood waters which flowed from a river behind their homes, whenever it rains heavily, causing extensive damage to furniture and household items.

When The Gleaner visited the community this week, the residents said that they have been spared heavy flooding in the last two years. However, with meteorologists forecasting an active hurricane season this year, the residents are on edge that their fortunes might change soon.

Shenoris Parker, a resident of the area, said that the flooding that once affected the community had ceased for some time now because the water course had been redirected elsewhere, as a result of complaints from residents of a housing scheme nearby that was recently constructed.

Parker, who takes care of her disabled older brother, shared memories of how unstable her life had been owing to constant flooding in the past.

“Once rain start falling, you affi fret. Somebody usually comes to warn us that water is in the river and it is rising,” she said.

“The worst me ever see was when we get flood out and when we come back to clean up thinking everything alright and a try hold a sleep, when we look, water come in again. Water reached breast height. For the past couple of years, we haven’t had any flooding. Water comes up but it runs off back,” Parker said.

While taking The Gleaner on a tour of a section of the riverbed behind her house, Nadine Burke described the area as scary.

She said residents have had sleepless nights during inclement weather.

Burke told The Gleaner that she is contemplating leaving the area if things get worse. “This is very, very dangerous. You might be sleeping at night and when you look, you just see it (river) come over, bank to bank. As long as a rainy season, you affi look out for it because it mash up furniture and people nuh have bed fi sleep inna.”

Local authorities have begun a public education exercise to advise Jamaicans that they could face prosecution under the Disaster Risk Management Act if they live in flood-prone areas and refuse to relocate, owing to an impending hurricane.

The 2020 hurricane season, which will run from June 1 to November 30, is predicted to produce 13 to 19 named storms. Six to 10 of those systems are expected to become hurricanes with three to six major ones.