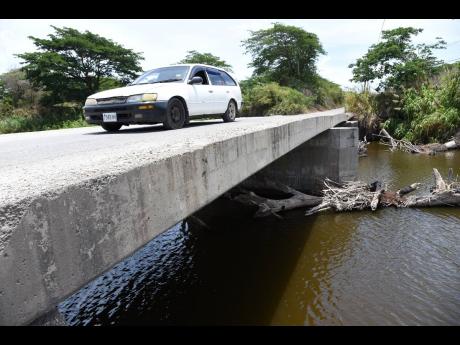 Ian Allen/Photographer
The Alley Bridge in Clarendon is sometimes flooded during heavy rainfall. The Atlantic hurricane season runs from June 1 to November 30. 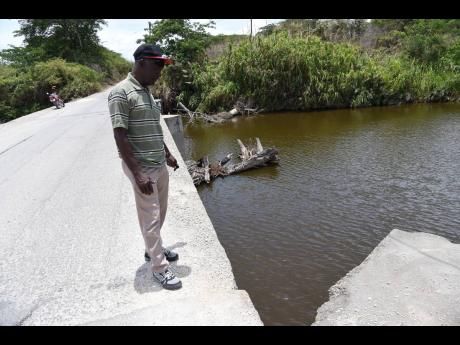 Ian Allen/Photographer
David Smalling says that the Alley Bridge in Clarendon is sometimes flooded when the Rio Minho is in spate.
1
2

Residents in a number of low-lying southeast Clarendon communities have expressed anxiety at what forecasters have projected to be a highly active hurricane season, with up to 19 named storms expected. Ten could become hurricanes.

Their situation is made worse by the slowing of preparedness because of a shift in focus to containing the local outbreak of the new coronavirus on the island.

Juliet Salmon, 47, a resident of Water Lane, said she is apprehensive about the hurricane season, which runs from June 1-November 30. Her community is flood prone, she said, and her family’s vulnerability is worsened because “the house nuh all that sturdy”.

“I have to be worried. I live with my elderly mother, who is 82, and I have three children at home also, so when this time a year comes, I get really nervous,” Salmon said.

Flood zones such as Banks, Alley, Hunts Pen, Sedge Pond, and Water Lane are at great risk during each hurricane season because of their topography. That also applies to Four Paths, Toll Gate, Foga Road, and McGilchrist Pen.

“COVID-19 has put a dent in a lot of the hurricane preparedness in this constituency, as have all the rest, but at the same time, there needs to be a very comprehensive and effective drain-cleaning programme, which is going to be very expensive but necessary,” he said.

Further, he said that assessment must continue to be done of at-risk residences and referrals made for relocation.

Residents in Alley told The Gleaner that they are dreading the impact major storms may have on their community.

Claude Wright, a taxi operator, said that his main concern is with the notorious Alley Bridge, which spans the Rio Minho.

When flooded, hundreds of people in the community are effectively cut off, forcing them to travel miles to detour through Lionel Town.

“Many people see this bridge and don’t even know how dangerous it is when we have a flood,” Wright, better known as ‘Wasp’, said.

“Water can get up to 25 and even 30 feet above normal. As high as you see the trees, water reaches up there,” he said.

Wright, who uses the bridge several times every day, said that he was worried and wants to know what contingencies his MP has made for commuters.

Charles, who is still getting his feet wet in the constituency, having been sworn in on March 12, said that the Clarendon Municipal Corporation, the Office of Disaster Preparedness and Emergency Management, and other agencies have been mulling over possible strategies.

“There are plans that have already been crafted to protect persons, but again, the focus must be on raising awareness and implementing the plan, and that’s where I come in.

“That is why I have already started the discussion with those relevant agencies and the councillor, who happens to be the mayor,” Charles said of Winston Maragh.

Charles said that he knows that residents are frustrated as several drains across his constituency have not yet been cleaned.

“Last week, I was there looking at drains across the constituency, Dampie, Hunts Pen, and other areas that if not cleaned, could cause significant damage because those areas are flood prone,” Charles said.