Battered US cities clean up, brace for more unrest 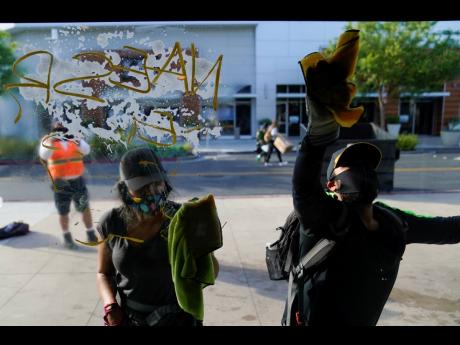 AP
Volunteers clean up graffiti on a window at The Pike Outlets, yesterday in Long Beach, California, after overnight protests in reaction to George Floyd’s death on May 25 in Minneapolis.

A country convulsed by violent protests picked up the pieces on Monday and braced for more trouble amid a coast-to-coast outpouring of rage over police killings of black people. President Donald Trump demanded that the nation’s governors crack down harder on the lawlessness, telling them: “Most of you are weak.”

After six straight days of unrest set off by the death of George Floyd in Minneapolis, a new routine was developing: residents waking up to neighbourhoods in shambles, shopkeepers sweeping up broken glass and taking stock of ransacked stores, and police and political leaders weighing how to address the boiling anger.

“We are a country that is scared,” said Sam Page, county executive in St Louis County, Missouri, where the city of Ferguson has been synonymous with the Black Lives Matter movement since the 2014 death of Michael Brown, a black 18-year-old, during a confrontation with a white officer.

In New York, Mayor Bill de Blasio imposed a curfew on the nation’s biggest city after a night in which groups of people broke into Chanel, Prada, and Rolex boutiques and electronics stores.

At the same time, the mayor said that the law-breaking in the city of 8.6 million people was being “fomented by a very small number of violent protesters. That is not what everyday community people are doing”.

While many of the demonstrations around the country have been peaceful protests by racially diverse crowds, others have descended into violence despite curfews in many cities across the US and the deployment of thousands of National Guard members in at least 15 states over the past week.

On Sunday, protesters hurled rocks and Molotov cocktails at police in Philadelphia, set a fire near the White House, and were hit with tear gas or pepper spray in Austin, Texas, Atlanta, and other cities. Seven Boston police officers were hospitalised. In some cities, thieves smashed their way into stores and ran off with as much as they could carry.

Floyd died last week after a white Minneapolis police officer pressed his knee against the handcuffed black man’s neck for several minutes, pinning him to the pavement, while Floyd gasped that he could not breathe.

Officer Derek Chauvin was charged with murder, but protesters are demanding that the three other officers at the scene be prosecuted. All four were fired.