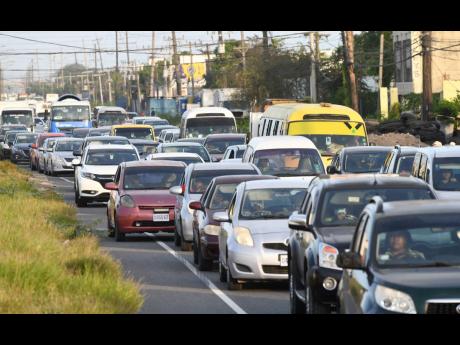 File
Rogue players have been wreaking havoc in the used-car industry.

USED-CAR DEALERS who play by the rules are now being left behind, as a flood of new operators are employing deviant strategies to sell imported second-hand vehicles, reducing the industry to a free-for-all.

“We are not happy and our members at large are not happy with what is going on,” Lynvalle Hamilton, the president of Jamaica Used Car Dealers Association (JUCDA), told The Gleaner.

“People are just shacking up, selling cars on sidewalk, selling cars from home, and not adhering to the motor vehicle import policy, and I do believe that something needs to be done. It’s long overdue.”

Hamilton said that his lobby has been “very vocal on this matter” and outlined their dissatisfaction to State Minister Floyd Green.

Green, who works out of the Ministry of Industry, Commerce, Agriculture and Fisheries, gave the keynote address at the AGM held earlier this year. He acknowledged that rogue dealers were threatening the viability of the sector and appealed for all stakeholders to be certified.

“We believe that for the industry to do well and grow, it has to be an industry that is based on certified dealers, and as a Government, we are impressing upon anyone who wants to get involved to be certified,” said Green.

“Clearly, there is a significant challenge in relation to rogue dealers, people who just set up shop and operate anywhere they feel like,” the state minister continued. “It is a threat to our resources, it is a threat to our income, and it is something we all want to see brought under control.”

Among the recommendations made by JUCDA is for proper background checks to be done on people seeking to enter the industry; for a source-of-funds authentication letter from the Financial Investigations Division to become mandatory for new entrants; and that the regulations prohibit unregistered newly imported vehicles from being advertised and offered for sale at places other than a certified used-car dealer’s lot.

The group has also questioned how dealers are being certified without meeting the stipulated requirements of the Motor Vehicle Import Policy, which mandates that operators be registered under the Companies Act; have a permanent address and location of operations approved and inspected by the responsible ministry; be registered with the National Insurance Scheme, National Housing Trust (NHT) and the Tax Audit and Assessment Department; have a valid Taxpayer Registration Number (TRN); stock spare parts of 10 per cent of inventory and offer related services; offer an expressed warranty on each unit sold, and comply with obligations under the Fair Competition Act (FCA); provide adequate repair and servicing facilities; and undergo an annual inspection and payment of a fee as determined by the responsible ministry.

Checks by The Gleaner revealed a number of car dealers operating without a repair and servicing facility. Several dealers have also acknowledged that inspection of facilities is not done regularly.

“The biggest problem is the little man that is parking up five to 10 cars on the road, they are the bigger problem,” said a veteran motor vehicle sales agent, who requested that his name be withheld.

“A car cost me $2.1 million and I put on $200,000 to make a money, but I have to pay taxes, workers, and other expenses out of it, while the little briefcase dealer get away scot-free … because he can sell the same car for $1.9m and has no expense at all.”

Another dealer, who says he has been in the business since 2008, told The Gleaner that he does not import cars, but makes purchases for bigger players in the Corporate Area.

“I do not import for myself, I buy from the big man in Kingston,” he said. “It is less headache to pay an importer to take down a few cars on his licence; it cost you an extra $50,000 depending on the year.”

According to the website of the import licensing authority, the Trade Board Limited, sedans with seating capacity exceeding five persons and station wagons and SUVs carrying fewer than eight should not be older than 2013, but older versions were on sale at several lots visited.

“No, they are not only for taxi operators; anyone can drive them,” a dealer said, anticipating a sale. “The big guys are able to import 2010 cars for you, but mainly Voxy, Mark X and Axio.”

“First-time car dealership business was so good, you were able to pay your bills comfortably, but now, sometimes the most I will make on what I paid for it is $100,000,” he lamented.