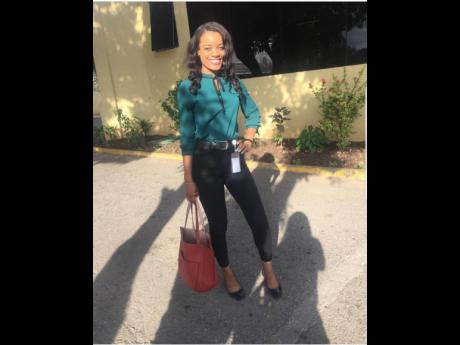 File
Jodian Fearon, posing with a small tummy during her pregnancy. She died at The University Hospital of the West Indies mere hours after giving birth at the Spanish Town Hospital.

The high-level probe into the death of Jodian Fearon is well advanced, with a file almost ready for submission to the director of public prosecutions (DPP) for recommendation.

The police provided an update on Fearon’s case as well as that of Jasmine Deen, the visually impaired University of the West Indies student who went missing in late February, this year, during a virtual press conference.

Fearon, the 23-year-old first-time mom whose death at The University Hospital of the West Indies (UHWI) in April sparked national outrage, will be laid to rest on Saturday, June 6.

Assistant Commissioner of Police Fitz Bailey said that 20 statements have been recorded in the Fearon matter.

“The investigation is well advanced. A significant amount of evidence has been secured, and we are at a stage where the file is being prepared for submission to the Office of the DPP for their advice,” Bailey said.

Fearon died under controversial circumstances at The University Hospital of the West Indies on April 25, six hours after delivering her baby at the Spanish Town Hospital in St Catherine.

The thanksgiving service will be live-streamed at https://www.youtube.com/channel/UCGOLgpJXun4c9INTHI_yN5Q/live in order to conform to the 15-person limit imposed on funeral attendance. The restriction will be enforced because of coronavirus spread concerns.

Fearon was at the privately operated Andrews Memorial Hospital for the delivery but had to leave after exhibiting perceived coronavirus-like symptoms.

According to Fearon’s doctor, both The UHWI and the Victoria Jubilee Hospital refused to admit the patient, who, at the time, was in labour.

Eventually, the Spanish Town Hospital agreed to take her, but when she arrived there in an ambulance, the facility was not ready to accommodate the woman.

After a C-section delivery, Fearon’s health deteriorated, and she was rushed to The UHWI for further treatment, where she died hours later.

“(The police) still continue to pursue that investigation. Two persons were charged in relation to the SIM card that was recovered. They have been remanded in custody,” Bailey added.

Deen has been missing since Thursday, February 27.