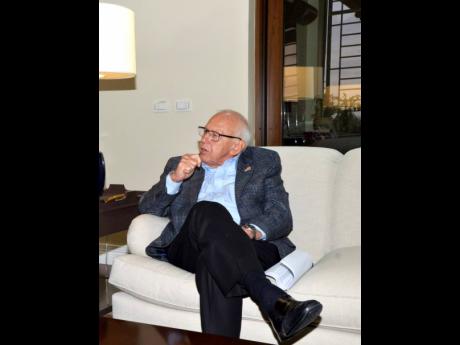 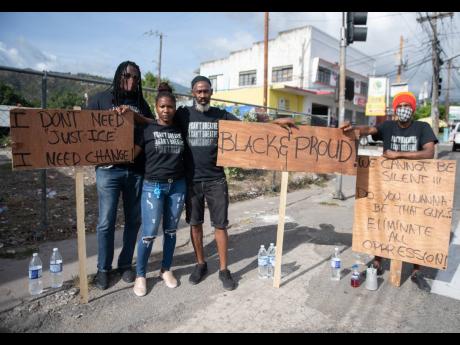 Gladstone Taylor
Peaceful protesters (from left) Andrew James, Jodian McPherson, Roderic Jonas and Akil Andrews stood on Hope Road in the vicinity of the United States Embassy on Thursday. Sparked by the recent killing of African American George Floyd in Minneapolis by white police officers, Andrews stated that the protest is not only in relation to Floyd’s unfortunate death but to worldwide racial injustices.
1
2

A “brown-skin” Donald Tapia yesterday endorsed peaceful protests that are now taking place in his home country and recounted his own experience marching for equality with civil rights activist Martin Luther King Jr in his early 20s.

“It was an experience that they will never take away from me,” the US ambassador to Jamaica said during a live interview on the Embassy’s Facebook page yesterday.

Tapia, who was nominated by US President Donald Trump to become an ambassador, said the march took place in Montgomery, Alabama.

“A lot of people don’t realise that I am brown skin. I am a Mexican. People don’t know that,” the US ambassador said before making reference to his “dark skin” father.

“I was called a lot of dirty names when I was in Montgomery, and at the same time, we had some people that were not understanding. We were spit on, and we had bottles thrown on us, not the plastic bottles that you see out there,” he said.

Yesterday, thousands of demonstrators continued to protest the death of a black man, George Floyd, who was killed last week in Minneapolis while in police custody.

The ambassador said that he, too, would have been involved in the protest taking place in the US if he was back home but made it clear that he would only be participating in the peaceful ones.

“What has happened in the United States is that a peaceful protest has been hijacked by a lot of thugs,” he declared.

When asked what Jamaicans could do to show support for the minority groups who are currently protesting for the reformation of the US legal system, Tapia said we should consider protesting, too – peacefully.

On Thursday, a small group of Jamaican protesters gathered near the US Embassy in St Andrew in solidarity with the family of Floyd.

In St Andrew, the local police insisted that the four protesters should relocate some 200 yards beyond where they stood.