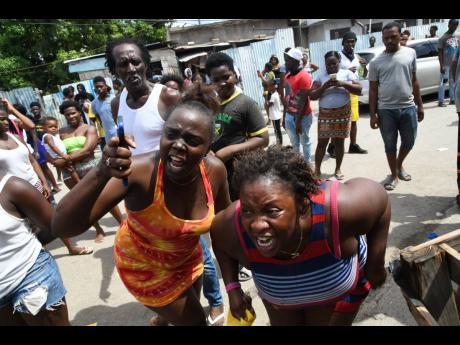 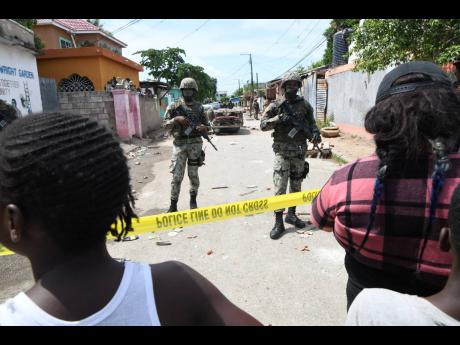 It is alleged that Ferguson was killed by police around 8 o’clock on York Avenue in Kingston 11.

Tensions were high as scores of residents loudly protested what they said is the third killing by the same police.

“Police Little Head must go” a placard read while another said “Ghetto people have rights too”.

“Three life now him tek in here! Why yuh haffi kill a man weh have a picture of a gun inna him phone?” an elderly woman questioned.

The incident is being investigated by the Independent Commission of Investigations (INDECOM).

In a release yesterday, INDECOM reported that the incident occurred following the pursuit of a man who ran upon seeing the police team. The Inspectorate and Professional Responsibility Oversight Bureau is investigating what it claims are the circumstances in which a man reportedly fired at a police team and was fatally shot. A firearm and 10 rounds of ammunition were seized.

“All concerned officers will be required to provide statements to the commission and attend our offices for interviews when required. All weapons from the team will be processed, boxed, and sealed and will be transported to the Government laboratory for testing,” a section of the release read.

Cousin of the deceased, Novlette Ferguson, said she was at work at the Mustard Seed Communities on Mahoe Drive when she heard sirens.

“After the prayer done about 8:15, the security called me and seh, ‘Yuh know seh dem kill yuh cousin’. Mi seh a weh Shawn coulda do fi dem kill him.

“When me guh up di road, di people dem seh the police tek up Shawn and a next yute den dem leggo di yute and carry Shawn go inna di lane guh kill him,” she recounted.

“Mi a beg yuh, help wi please!” a woman cried out as she knelt in the road.

In an attempt to calm angry residents, Member of Parliament for St Andrew South West Angela Brown Burke explained that reports had previously been made about the police who residents have accused of killing Ferguson.

“I have met with the police at Hunts Bay time and time again. When we saw that it wasn’t going anywhere, I went to the commissioner of police,” she said from a microphone in the community.