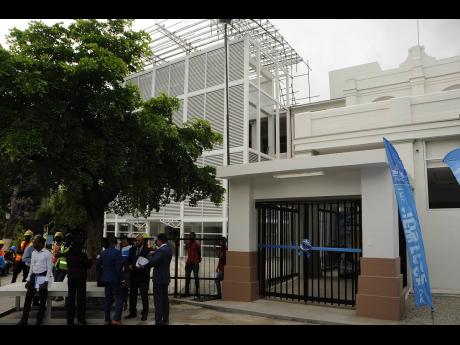 A serial rapist who was ordered to serve 38 years in prison for each of the eight women he victimised over a six-week span has had his sentence slashed in half.

Patrick Green, 33, was initially sentenced to a total of 499 years in prison after he pleaded guilty in the Clarendon Circuit Court in December 2014 to eight counts of rape, eight counts of illegal possession of firearm, five counts of robbery with aggravation and two counts of grievous sexual assault.

He was arrested and charged after he admitted to police investigators that he was responsible for a string of rapes in the Clarendon communities of Savannah Cross and Palmers Cross, including two in one night, between July 9 and August 21, 2013. Green told cops that he had developed a hatred for women because his spouse ended their relationship and would not let him see his child.

In addition to his sentence for rape, Justice Sarah Thompson James, who presided over the case, ordered that Green should serve 10 years for each count of illegal possession of firearm. The ‘gun’ used in the crime turned out to be fake.

However, in a ruling handed down last week Tuesday, the Court of Appeal ordered that the confessed serial rapist should instead serve 19 years and six months for each count of rape and 14 years for each count of grievous sexual assault.

In addition, Jamaica’s second-highest court also ordered that the serial rapist serve a minimum of 10 years before being eligible for parole, instead of the 30-year minimum period stipulated by Thompson James, and that the clock on his sentence should start counting from December 19, 2014.

Green had challenged both sentences on the grounds that they were manifestly excessive. He did not contest the sentences imposed for illegal possession of firearm and robbery with aggravation.

Seeking to explain their decision, the panel of three Appeal Court judges who heard Green’s legal challenge pointed to at least three errors by Thompson James in her approach to sentencing.

A social enquiry report produced at Green’s sentencing hearing in 2014 detailed a number of “dysfunctional” relationships with women and his “chaotic and unstable family life”, which included three suicide attempts and chronic use of ganja and crack cocaine.

It also revealed that the female who gave birth to two of his children was under the statutory age of consent at the time, resulting in his conviction for carnal abuse and a two-year probationary period.

The 2014 report indicated that he expressed deep remorse for the wrongs he had done and acknowledged that he was “not yet ready to return to society”.

Carolyn Hay, the attorney who represented Green before the Court of Appeal, acknowledged the seriousness of his crimes, but argued that the sentences imposed by Thompson James were “manifestly excessive” when compared with similar cases adjudicated in the local courts.

The panel of Appeal Court judges, in their decision, said it seem “clear” from Thompson James’ remarks during the sentencing hearing that she did not utilise a methodical approach to determine Green’s punishment, and that not much consideration was given to the possibility of rehabilitation.

“I must tell you also that, in arriving at a just and appropriate sentence, the court must look at the interest of society and strike a balance when considering what sentence the court has to impose ... in some cases, the protection of society is an overwhelming consideration,” Thompson James was quoted as saying during the sentencing hearing, according to court transcripts.

The Appeal Court judges acknowledged that she made a “passing reference to redemption”, but said “it is clear that her primary focus was on the public interest and what she described as ‘the protection of society’.”