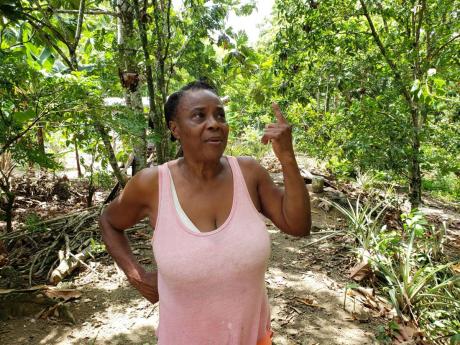 Photo by Shanna Monteith
Sylvia Anderson, resident of Fountain Road, Bath, says that her home, sited in the midst of a river course, is in jeopardy during heavy rainfall.

Residents of Fountain Road in Bath, St Thomas, say they are trusting God to be their refuge this hurricane season in light of flood threats posed by the Sulphur River that flows through their community.

In the past, heavy rains have caused the river to overflow its banks, causing massive landslides that have proven hazardous to their homes and lives.

“We’re living up here, and sometimes we are in fear, but we trust in God. The river needs to be cleaned out, and the groyne needs to be fixed ... . The other day, rain fall for three hours and water almost reach into the yard, so imagine if we get a whole night of rain,” said resident of Bath Sylvia Anderson, who has been living in the area for more than 30 years.

“The last time, rain fall and water from up the hill wash into people house. They come and they made a restraining wall near there, but what about the people that live above and below that section, like me?”

Anderson told The Gleaner that the river channel, which incorporates part of her backyard, has got higher over the years.

She recalls having to climb down into the riverbed in the past. Now, she can step right on to it.

“It’s the highest I’ve ever seen it, and I’ve lived here a very long time, because the old groyne and the riverbed almost deh on the same level now. So now, more than ever, we fraid, because it wasn’t this high back then and it flood over, so I can imagine what will happen if we get a good shower now.”

In addition to the threat posed by the rising riverbed in her backyard and lack of riverbank protection, Anderson is concerned about clogged gutters that also contribute to the flooding of the main thoroughfare of Fountain Road.

Anderson complains that roadwork crews sometimes “throw the dirt in the gully”, blocking drains and causing the inundation of homes.

Another resident, Joshua Harris, revealed that he has had to plant trees in his yard as a buffer warding off the encroaching dangers of the river.

“There’s an old training from weh put in from about 1970, but it a rotten now. When a flood time, mi fear. We haffi fear.”