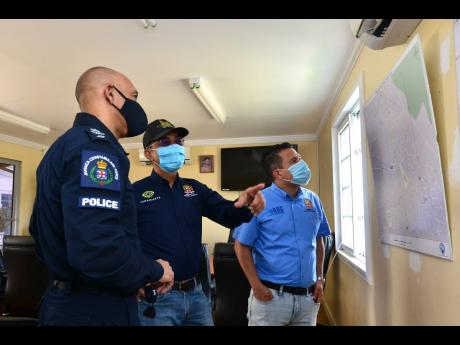 Nearly five years after Britain’s Cameron administration offered to part-finance a new penal facility in Jamaica, the Holness Government has announced that it will fund the construction of a state-of-the-art prison out of pocket.

The declaration was made on Saturday by National Security Minister Dr Horace Chang during a tour of four police lock-ups in Area Four alongside Commissioner of Police Antony Anderson and Minister without Portfolio Matthew Samuda.

Prime Minister Andrew Holness revealed during a press briefing last Friday that a proposal for a new prison was currently on the table, but he declined to go into details.

Chang said that the project would be funded by the Jamaican Government in order to maintain the island’s cultural imperative, adding that the Government considered security its primary responsibility.

“We have some very valued partners in the national area, but unless we do work with the foundation with our resources in our manner and in our culture, we will not succeed in the long term. There was a proposal at one point for a prison from an international partner that we did not accept. We are looking at doing this with Jamaican financing and Jamaican personnel,” Chang said.

Chang’s reference to culture might telegraph the unease caused by the controversial offer by UK Prime Minister David Cameron to part-fund construction of a prison here. It touched a nerve with socio-cultural currents of chattel slavery, complicated by the narrative of Britain as coloniser-turned-benefactor.

Under the non-binding prison agreement struck with the Portia Simpson Miller administration, Jamaica would fund 60 per cent of the prison construction cost. The British would provide $5.5 billion. As part of the deal, 300 Jamaicans serving time in the UK for crimes committed there would complete the winding up of their sentences in Jamaica.

While noting that the development of the proposed prison was still in its embryonic stages, Chang declined to divulge a working estimate for the build-out of the facility. He conceded, however, that budgetary cuts triggered by the coronavirus-caused slowdown in commerce would alter the timeline for implementation.

Chang told The Gleaner that one of the challenges the new maximum-security facility would have to address was the failure of the security architecture to blunt the influence of criminal dons who, he said, continue to wield outsize power beyond prison walls. He hinted that cell-phone signal-blocking devices and other initiatives had failed to halt communication between powerful gangsters and the underworld.

“It is known that men in incarceration will get access to cell phones, and they direct their operations from inside the prison from time to time. We are taking steps to correct that now, but the new prison will have to have that kind of facility,” said Chang.

“We need a maximum-security prison where we can lock up a number of the leaders safe and away from their contacts and prevent them from investing and creating outside.”

The minister also said that a new prison would have to better accommodate inmates classified as low risk to safeguard against them becoming hard criminals. He said that the Government had not yet settled on the proposed penal centre’s capacity but disclosed that “we will have somewhere that can comfortably host more than 1,000, more like 2,000”.

In the meantime, the minister said that works had been completed on the majority of police stations slated to be reconstructed as a part of the ministry’s Construction and Improvement of Police Buildings initiative despite budgetary constraints caused by COVID-19.

Chang said that as part of the Government’s plan to improve working conditions for the police, more than 100 stations had been renovated and approximately 25 are still under repair.

He further disclosed that the coronavirus restrictions had only impacted the construction of two major projects, one that was to be built in Spanish Town, St Catherine, and the other in Westmoreland.

The minister said that while the planning process and land acquisition have been finalised, the Westmoreland build-out could possibly start by year end, while work on the Spanish Town edifice would be delayed by another year.