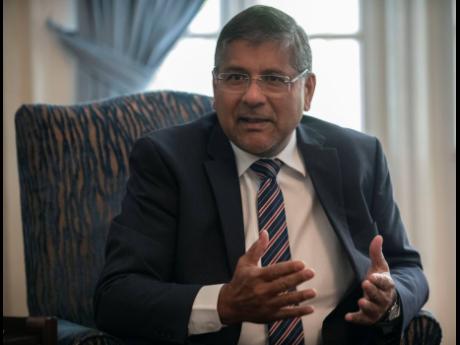 PRIME MINISTER Andrew Holness told the British high commissioner to Jamaica in August 2017 that his Government “would not take forward” the United Kingdom’s offer to help build a prison here, in the latest twist to the saga of who rejected the proposal.

Holness had raised the issue back then, the High Commission said yesterday in response to questions submitted from The Gleaner.

The response was referencing the first meeting Asif Ahmad held with the prime minister after taking up his post in Kingston. Ahmad, the statement said, replied that he would not raise the issue again.

This is the latest take in the squabble between the Opposition People’s National Party (PNP) and the Holness administration over who rejected the $5.5-billion proposal that would see Jamaica finding the other 60 per cent.

Holness declared last Friday that his Government did not reject the deal, saying instead that it was the PNP administration in power at the time to which the offer was made.

That first-time claim appeared contradictory to the “yes” Kamina Johnson Smith, the foreign affairs and foreign trade minister, said when asked in the Senate on January 13, 2017 if the Government had rejected the deal.

Holness followed up with a statement last Sunday in which he insisted on the PNP’s rejection. He did not reference the discussions he had with the British high commissioner.

Meanwhile, questioned on whether it viewed the offer as ‘rejected’, the high commission said: “The offer never got into a negotiation phase and no details were exchanged. It would be accurate to say that a formal offer was not made and thus required no rejection as far as the UK government is concerned.”

“In the absence of any substantive discussion between the two governments, the offer has lapsed,” the high commission responded when asked about discussions on the issue since the Holness administration took office in March 2016.

It did not say when the offer lapsed.

In her 2017 Senate responses, Johnson Smith declined to say when the Government rejected the offer, although confirming that a memorandum of understanding was signed between Jamaica and the UK.

Peter Bunting, the security minister at the time the offer was made, had said that the non-binding agreement would have been subjected to parliamentary scrutiny before final approval.

That a prison transfer deal with the UK was not signed “was neither tantamount to a rejection of the cooperation to build the new facility nor allowing the issue to lapse,” Opposition Leader Peter Phillips said in a statement yesterday.

“It is the rule that ministerial statements and answers to questions are done through decisions of Cabinet and so the prime minister needs only to refresh his memory and then come clean to Jamaica on the decision of his own Cabinet,” Phillips said of Johnson Smith’s 2017 answers.

The Holness-led opposition was against the offer, suggesting that the money be used for schools and education, a point former security minister Robert Montague emphasised when defending his administration’s decision to reject the deal in 2017.

Holness statement on Sunday did not explain why Johnson Smith did not tell the Senate that the offer was rejected before the JLP administration formed the government and, given that inherited knowledge, why it took the Government six months to answer the questions on the issue.

Jamaica’s prison conditions, widely viewed as inhumane, are back in focus following reports that 81-year-old Noel Chambers died under deplorable circumstances at the Tower Street Adult Correctional Centre, where he had been held for 40 years without trial.