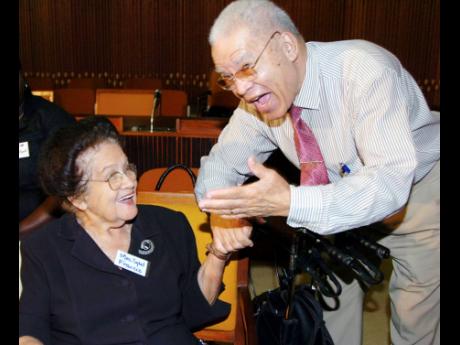 File
Sybil Francis (left), former director of the Social Welfare Training Centre and chairman of the National Council for Senior Citizens, shares a light moment with Clinton Davis, president of the Jamaica Government Pensioners’ Association, at the disclosure of the National Consultation on Survey Results of Older Persons in Selected Communities held at the Jamaica Conference Centre in Kingston in an undated Gleaner photo.

Late aged-care and social work advocate Sybil Francis has been described as a gentle powerhouse and a source of inspiration to hundreds of people whose lives she touched.

Francis, a former director of the Social Welfare Training Centre and chairman of the National Council for Senior Citizens (NCSC), died on May 30 aged 106. She died at home.

Among those remembering the diminutive woman who stood five feet tall and was still revving her Volkswagen across campus well into her 80s is Professor Denise Eldemire-Shearer, who recalled her “willingness to share ideas and to guide people in a soft and gentle way”.

Eldemire-Shearer, director of the Mona Ageing and Wellness Centre at The University of the West Indies, said that Francis took her under her wing when she joined the NCSC in 1982.

“I also remember her and that blinking little VW at university, when you used to hear this little car racing down with her near to 80 and pulling down gears, as she drove this vehicle all over the place. When her husband died, there was an automatic car at the house and she would not drive it, preferring her stick shift,” said Eldemire-Shearer.

Francis never had children, but was the mainstay of her family that comprised three sisters who, when their husbands all died within a year of each other, lived together in a real-life reprise of American sitcom Golden Girls.

She is survived by one sister.

In a Gleaner interview published on August 5, 2002, the then 88-year-old retired social worker shared some of her many adventures across Jamaica, including personal sacrifices and challenges faced.

She picked up the story in the 1960s when with Jamaica having achieved political Independence expectations were very high, with people power fuelling some lofty aspirations.

“In the 1930s, ’40s and ’50s, social work was largely spearheaded by the Jamaica Welfare Limited, a non-governmental organisation that later became the Jamaica Social Welfare Commission, a government-run agency,” said Francis.

The veteran social worker enjoyed engaging with small farmers who lived on plots of land the government had sold them in the countryside and was given the responsibility to create communities out of these settlements. This meant a lot of travelling to diverse rural communities such as Treadways and Pennants in Clarendon, as well as Boundbrook, Portland.

Eldemire-Shearer recalled yesterday that her friend and mentor stopped working “probably seven or eight years ago”, having laboured for the better part of a century.

“May we continue to perpetuate the work she started [and] celebrate her life and incredible contribution to social work and age care worldwide,” Eldemire-Shearer said.