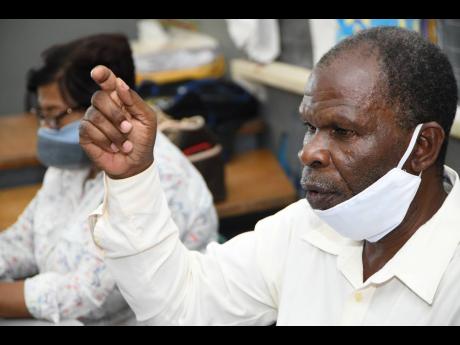 BUS AND taxi operators have threatened to shut down Jamaica’s transport sector next Monday if their demand for a 100 per cent fare increase is not met.

They have also singled out Transport Minister Robert Montague for criticism for the sector’s “chaka chaka” state.

Egeton Newman, head of the Transport Operators Development Sustainable Services (TODSS) grouping, said at Monday’s press conference at the Half-Way Tree Primary School that the Government has been given seven days to respond.

Newman said that bus and taxi operators have gone “eight long years” without an increase.

“Ask National Bakery if they have been waiting this long to increase the price of bread. Ask Flour Mills, JPS, you name it,” said Newman, warning that the operators had had enough.

But Montague has bristled at Newman’s warning of a strike, saying that he has always been available for discussions with the transport group.

The minister sought to use moral suasion to placate the transport operators, questioning whether Newman would “subject poor people to additional `hardships in light of the COVID pandemic”.

“Mr Newman could not and would not be so selfish nor irresponsible to call a strike when poor people’s children are preparing for exams,” Montague told The Gleaner Monday evening.

“... Most bus and taxi operators have experienced poverty and know the value of education to poor people.”

Schools have been closed since mid-March because of coronavirus restrictions but have been allowed to reopen, for four weeks, for refresher classes ahead of external exams scheduled to kick off on July 13.

For increases in rates charged for public utilities such as water and electricity, providers have to seek recourse with the Office of Utilities Regulation, which reviews and determines the scale of price rises. But private operators offering public transport have long criticised the process for rate reviews, a power that lies within the purview of the Ministry of Transport.

Newman sought to get the public onside, urged patience and understanding of the busmen’s and cabbies’ pain.

There are more than 8,000 PPV vehicles operating in Half-Way Tree and its environs daily. That number only decreases on Sundays, when there are, on average, far fewer commuters.

Factoring fuel charges of more than $4 million annually, daily wages of at least $5,000, Newman said that other operational expenses had made survival unfeasible.

“How can a man operating between Half-Way Tree and Greater Portmore or Gregory Park, for example, pay $804,000 per year to operate that bus? How can he survive when he pays $3.2 million for toll and another $4 million for insurance?” he asked.

The TODSS boss also took a swipe at the Government and wrecker companies for allegedly profiteering from the targeting of PPV vehicles, citing that the Kingston Metropolitan Transport Region alone accounted for the impounding of more than 300 PPV vehicles daily.

That estimate could not be independently verified.

“They put them in the pound, and for the first day, that is $5,000 and every day thereafter. They are making big money while the operators suffer, and all of this feeds into the level of indiscipline the public speaks about from taxi operators,” he said.

Meanwhile, TODSS General Secretary Dianne Dennis said that the sector has been mistreated by successive ministers of transport.

“And so as a consequence, they play us and they behave as master puppeteers and we the operators are the puppets they manipulate.”

Restrictions aimed at curbing the coronavirus pandemic have led to a massive decline in revenue for the industry since mid-March, with the shuttering of schools, bars and entertainment venues. Negligible church attendance and widespread work-from-arrangements have also hurt ridership.

Dennis argued that a fare increase was warranted now more than ever.

“How is it we have a Fair Trade Commission and they don’t see something wrong with what us, as subfranchise holders, are going through?” she asked.